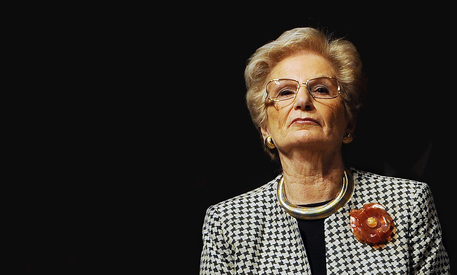 (ANSA) - Rome, January 19 - Italian President Sergio Mattarella named 87-year-old Holocaust survivor Liliana Segre Life Senator on Friday.
Segre, an Auschwitz survivor, has written books and taken part in films about the Holocaust.
Segre told ANSA being named a Life Senator had been a "bolt from the blue" and that she was "just an emblem" for Holocaust remembrance. "I can't claim more importance than being an emblem, a person telling what she was witness to," said Segre, 87.
"It was a bolt from the blue: I feel like any other woman, a grandmother, and I never thought of all of this.
"Knowing that I'm among the Life Senators is an honour and a great responsibility".
The president of the Italian Union of Jewish Communities (UCEI), Noemi Di Segni, welcomed the decision. "I express our deep emotion at President Mattarella's decision in the name of all of Italy's Jewish communities," said Di Segni. "It precisely responds to the need to ensure that the institution called on to legislate has a memory of what happened in the past".
Premier Paolo Gentiloni echoed those sentiments in a tweet.
"The life of Liliana Segre is a testimony of freedom," he said.
"As a Senator she will indicate the value of memory. "A precious decision 80 years after the (Fascist) racial laws". The Milan-born woman was taken by train to Auschwitz in January 1944.
She was one of just 25 survivors of the death camp from the 776 Italian children taken there. Her father and her paternal grandparents were killed in the Shaoh - her mother died when Segre was a baby. She was tattooed with the number 75190 and made to do forced labour at a munitions plant. She was liberated from Malchow, one of the sub-camps of Ravensbrück Nazi concentration camp, on May Day 1945.
"President Sergio Mattarella called me this morning to inform me of his decision to name me Life Senator," Segre said.
"I thank him for this great honour. The news took me totally by surprise.
"I have never been active in politics and I am an ordinary person, a grandmother with a life full of interests and commitments. "The president certainly wanted to honour, via me, the memory of many others in this year, 2018, in which there is the 80th anniversary of the racial laws.
"I feel the enormous task and the grave responsibility to try at least, with all my limits, to take to the Senate the distance voices that risk being lost in oblivion.
"The voices of thousands of Italians, members of the small Jewish minority, who in 1938 suffered the humiliation of being degraded by the nation they loved - they were expelled from schools, from professions and from the society of first-class citizens".
Segre is the first Life Senator appointed by Mattarella.
There are now six, with four having been named by ex-president Giorgio Napolitano, and Napolitano himself being a Life Senator by right.
The four named by Napolitano are former premier Mario Monti, biologist Elena Cattaneo, architect Renzo Piano and Nobel prizewinning chemist Carlo Rubbia.