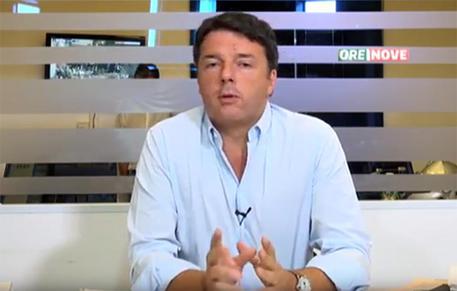 (ANSA) - Rome, July 10 - Democratic Party (PD) leader Matteo Renzi has proposed scrapping the Fiscal Compact and having new EU budget laws that allow deficits of up to 3% of gross domestic product (GDP).
"In my book I make a proposal, let's bring down debt but return to Maastricht and a deficit (limit) of 3% to give oxygen to the economy," ex-premier Renzi told RAI television referring to a new book he has written ahead of a general election that will be held early in 2018 at the latest. "Let's scrap the Fiscal Pact and bring down taxes for families with children, artisans and small businesses and those who cannot get by.
"It is not just a PD idea, but one for all the parties to take to Europe - in other countries they go into Europe together. "The other parties should accept this proposal, because it's not the PD that needs lower taxes, the country does". The European Commission on Monday gave no official comment on Renzi's proposal, which would allow the deficit-to-GDP ratio to climb to 2.9% for five years. "(European Commission President Jean-Claude) Juncker has a very good relationship with (Italian) Premier (Paolo) Gentiloni," a spokesperson for Juncker said. "The relevant Commissioners have a very good relationship with (Economy) Minister (Pier Carlo) Padoan.
"The European Commission does not comment on the comments of people outside this circle".
But Eurogroup head Jeroen Dijsselbloem rejected Renzi's notion.
He said running a 2.9% deficit for five years would be "outside the budget rules" and was "not a decision that a country can take on its own". The Dutch finance minister stressed "we are together in this monetary union".
Dijsselbloem added: "I'm always open to making the rules more efficient, effective, but we can't unilaterally say the rules don't suit me this year and the next five".
And European Economic Affairs Commissioner Pierre Moscovici also rejected Renzi's proposal, saying "we need an Italy at the centre of the eurozone which respects the rules which are intelligent and applied in an intelligent and flexible way in its case". He said "Italy is really the country that cannot complain about the Commission's observations, being the only country which has benefited from all the flexibility of the (Stability) Pact: investments, reforms, earthquakes".
Renzi retorted that the European Commission will have to say Yes to a return to Maastricht budget criteria and urged the EC to think more about meeting its commitment to get member States to help Italy on the migrant emergency.
"Is it possible that Europe should tell us what to do and then isn't able to maintain commitments on (migrant) relocation?," he said.
"I have great respect, but they too should start to get member States to respect their commitments", he said.
Renzi also said his idea would be one for the next legislature following a general election expected next spring. He said "we'll develop it in the next legislature, we can't give (Economy Minister) Pier Carlo Padoan and (Premier) Paolo Gentiloni this responsibility".
Padoan also said Renzi's proposal is an issue "for the next legislature", when asked if the government might consider putting it into next year's budget.
Renzi made the proposal in his new book, Avanti (Forward). There had been speculation he had it in time to be a vote winner in the next general election.