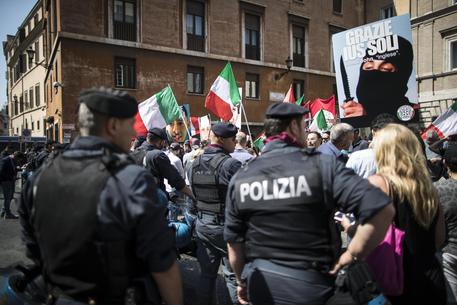 (ANSA) - Rome, June 15 - Members of the far-right CasaPound group clashed with police while demonstrating outside the Senate Thursday against a law that would award citizenship to children born to immigrants on Italian soil.
The so-called 'ius soli' ('law of the soil') in Latin hit the floor of the Senate Thursday where it is expected to be passed despite opposition from righwing and ant-establishment groups. CasaPound members tried to break through a police cordon and get to the Senate but were held back with water cannon and also claimed to have been struck with batons. Lombardy Governor Roberto Maroni of the anti-immigrant Northern League called the bill "an aberration" and said the region was ready to appeal to the Constitutional Court. Lower House Speaker Laura Boldrini said "today it's hard to affirm new rights".
Currently the children of immigrants must wait until they are 18 to apply for Italian citizenship.
The ius soli law would grant citizenship to foreign babies born on Italian soil and to children who have spent at least five years in the Italian school system.
Rightwing and centre-right parties argue that citizenship should only be granted to those who have earned out by integration.
Leftwing, centre-left and liberal parties say the law is a basic right granted in many other countries.