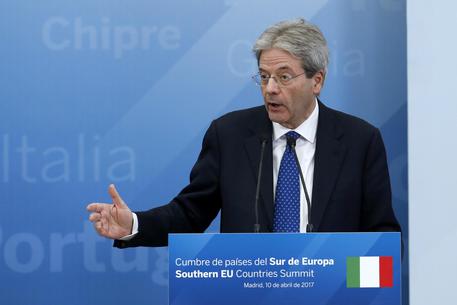 (ANSA) - Rome, April 11 - Premier Paolo Gentiloni said Tuesday that his cabinet had approved a new economic and financial blueprint, the DEF, as well as a budget adjustment demanded by the European Union. "The government has given the green light to the DEF and to a decree containing various interventions for growth and development, including the budget correction," he said. The European Commission had told Italy to cut its structural deficit by an additional 0.2% of GDP by the end of April to avert infringement procedures.
Gentiloni said this decree was split into four sections, only one of which regarded the deficit reduction requested by the EU.
The other parts concerned measures for local authorities, measures for the areas of central Italy hit by a recent series of earthquakes and other measures for growth. He said the cabinet had also discussed a 47.5-billion-euro investment plan to run up to 2032, "It is the best response to those who wanted to present this operation as depressive," Gentiloni said. "It is an operation that continues the path of restoring the public finances to health and relaunching the economy". Gentiloni said that, as a result of the adjustment, Italy's deficit for 2017 should come down to 2.1%.
The government also revised up its GDP forecast for 2017 to 1.1% in its new economic blueprint.
The previous growth forecast for this year was 1%.
Economy Minister Pier Carlo Padoan said the adjustment was worth 3.4 billion euros this year, "obtained via more efficient tax management, measures to combat tax evasion validated by the EU and measures, only in part, of spending cuts".