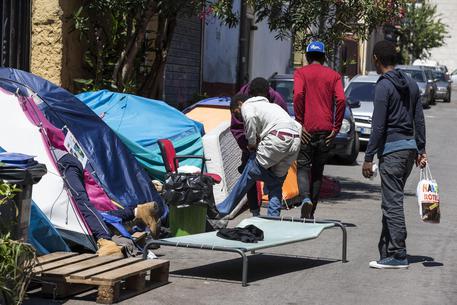 (ANSA) - Rome, July 8 - Newly-elected Rome Mayor Virginia Raggi on Friday said a solution will be found "next week" to relocate dozens of homeless migrants after the capital's Baobab migrant reception center was closed last December. Speaking to reporters at the Prefecture where she attended a meeting on the issue, Raggi said the migrants could not camp in the street in "inhumane" living conditions.
"We will understand with the prefect where they will go", the mayor said.
Roughly 40 migrants from North Africa, Eritrea and Ethiopia who were staying at the Baobab center in Via Cupa near the Tiburtina station are living on the street after the center, which also provided meals, was closed.
Local authorities said the center had to be shut down because it was under court order to be handed back to its private owner but promised the migrants would be relocated to other reception centers in the city.
Shortly before it was closed, in late November last year, police raided the center and identified 23 migrants without legal documents as part of tougher security measures following the deadly November 13 terror attacks in Paris before the start of the Vatican's Jubilee Year on December 8.