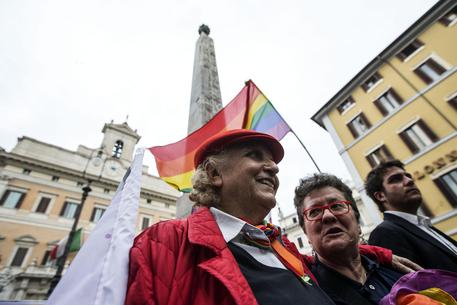 (ANSA) - Rome, May 11 - Italy's new civil unions law extends to gays some of the same rights and protections that married heterosexual couples currently enjoy. Following are the main elements of the law: CIVIL UNIONS: like marriages, they are entered into before a public official in the presence of two witnesses. The union gets recorded in the state civil registry.
SURNAMES: the partners can decide to take on each other's surname or a combination of the two, in whichever order, for the duration of the civil union.
MUTUAL OBLIGATIONS: the partners in a civil union have a duty to live together under the same roof, and to give each other material and moral support. Unlike in marriage, they are not obligated to remain faithful. "Both parties must contribute to the couple's common needs according to their assets and their ability to work, either as a professional or a homemaker".
FAMILY LIFE: "The parties jointly decide on a way of life and a common residence, with each party having the right to enact what was agreed upon of common accord". This refers to issues such as where to live and where to send children to school.
ASSETS: all property and assets in a civil union are held in common, unless the partners decide otherwise.
PENSIONS, SEVERANCE, INHERITANCE: a deceased partner's pension and severance pay revert to the surviving partner in a civil union. Inheritance rules are the same as for married couples, i.e. the surviving partner gets 50% of the couple's assets and the remainder goes to any children.
DISSOLUTION OF CIVIL UNIONS: a 1970 divorce law applies, but without a mandatory trial separation period.
ADOPTIONS: The law explicitly bans one of the two kinds of adoption allowed in Italy. So-called legitimizing adoptions make the adoptee a full member of the adopting family, including the extended family, and cuts off legal ties with the family of origin; non-legitimizing adoption does not cut off legal ties and obligations to the family of origin. In both cases, the adopted person can inherit from their adoptive family. The new civil unions law explicitly forbids partners in a civil union from entering into legitimizing adoptions. However, it also says "current adoption norms remain applicable". Some analysts say this will allow family courts leeway to allow stepchild adoptions on a case-by-case basis. COMMON-LAW MARRIAGE: is defined as "two adults united in a stable way by ties of affection and mutual moral and material assistance, and who are not bound by parentage, affinity, or adoption, nor by marriage or civil union". ASSISTANCE IN HOSPITAL OR PRISON: common-law partners have the same rights as married spouses to assist their jailed or hospitalized partners.
ORGAN DONATION: each common-law partner can designate the other to act in their stead in health matters - with either full or limited powers - if illness makes them of unsound mind or in case of death, in matters of organ donation, treatment of the remains, and last rites.
HOME: if one of the partners dies, the other has the right to take over the lease. If the deceased is the homeowner, the surviving partner has the right to live in the home for two to five years, depending on the length of the common-law marriage.
Being in a common-law marriage gives couples the right to sign up for council housing.
ASSETS: partners in a common-law marriage can write up a contract regulating their asset ownership, including joint ownership.
ALIMONY: in case of separation, should one partner be left in a state of need or inability to support him or herself, they have a right to court-ordered alimony to be set based on the length of time the common-law marriage lasted.