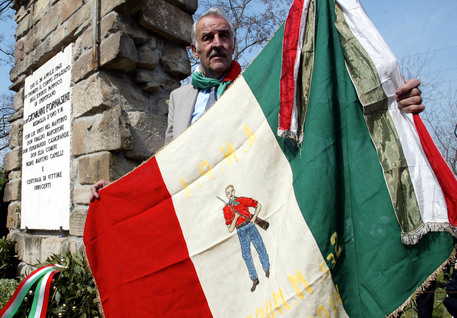 (ANSA) - Bologna, March 4 - Italian politicians expressed outrage on Friday over news that the German town of Englesbrand had awarded a medal to its resident Wilhelm Kusterer, a former Nazi SS member who participated in the 1944 Marzabotto massacre.
The massacre, which took place in the small village of Marzabotto near Bologna, was the worst mass murder of civilians that took place in Western Europe during World War II.
The massacre was carried out in reprisal for local support given to the partisans and the Resistance and also took in the adjacent Grizzana Morandi and Monzuno areas of tthe Monte Sole massif, which is part of the Apennine range in the province of Bologna.
Among the victims, 45 were less than two years old, 110 were less than 10 years old, 95 were less than 16 years old, 142 were over 60 years old, 316 were females and five were Catholic priests.
"That medal is an insult not only to the 1,150 people barbarically killed by the ex-SS soldier and to their families, but to all of us who have been continuously involved in imparting the horror of Nazi-Fascist history in order to build a democratic and peaceful future," said Massimo Mezzetti, Emilia Romagna regional councillor for culture.
Mezzetti said he contacted Emilia Romagna Governor Stefano Bonaccini and they would be requesting that the German town revoke the medal.
The head of the Democratic Party (PD) in the region, Stefano Caliandro, said he would present a resolution in the regional legislative assembly in the coming days "to invite the regional government to convey to the Italian government and the local German institutions our community's opposition to and disappointment over the news" of the medal.
"It fills us with anger," Caliandro said.
"We certainly owe it to the memory of the victims and their families but we also have a responsibility to the younger generations to make sure these acts don't go unnoticed".