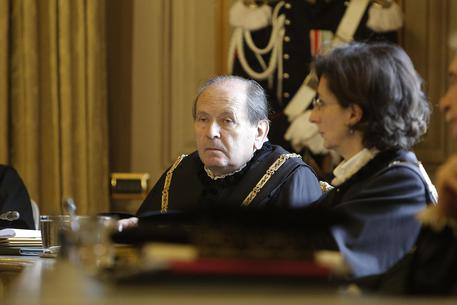 (supersedes previous)(ANSA) - Rome, February 24 - Top jurist Paolo Grossi was elected president of Italy's Constitutional Court for a two-year mandate on Wednesday. Born in Florence on January 29, 1933, Grossi has had a long career as a lecturer in history of law and canon law in various universities. He was named a Constitutional Court justice by then Italian president, Giorgio Napolitano, on February 23, 2009. Grossi's predecessor Alessandro Criscuolo resigned on February 11 for family reasons, although he still sits on the court.
In his first remarks to reporters as the new high court chief, Grossi hailed a ruling earlier in the day that struck down a Lombardy regional law restricting the building of new mosques in the northern Italian region. "Our concern is to be the custodians of fundamental rights - the essential core of the ruling is based on avoiding discrimination," he said. The rightwing anti-immigrant Northern League party, of which Lombardy Governor Roberto Maroni is a member, earlier slammed the top court's ruling as being "Islamic".
Grossi also said that a Constitutional Court ruling in a stepchild adoption case earlier in the day had nothing to do with a civil unions bill now before the Senate. "Nothing to do with Italian gay couples and with the ongoing debate," he said. "It was obviously inadmissible - (the ruling) concerned a small matter and a judge that didn't know how to do his job". The case concerned a lesbian couple who married in the United States and requested that their adoption of each other's stepchildren be recognised in Italy after they moved to Bologna.
A Bologna lower court had turned the case over to the Constitutional Court, which de facto declined to consider it.