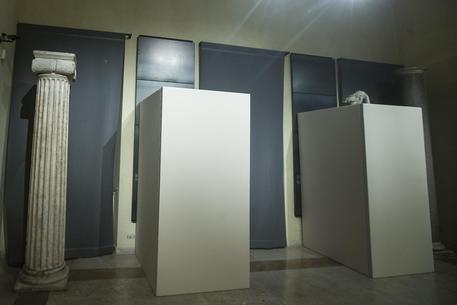 (ANSA) - Rome, January 25 - A decision to cover up several nude statues at Rome's Capitoline Museums during a visit on Monday by Iranian President Hassan Rouhani has stirred a furore.
The move was apparently made as a form of respect for Iranian culture.
Furthermore, wine, which is forbidden by Islam as it is alcoholic, was not served at institutional ceremonies either on Tuesday, ANSA sources said.
"The covering up of the statues in the Capitoline Museums during Rouhani's visit is a sign of excessive zeal," Luca Squeri, an MP for ex-premier Silvio Berlusconi's opposition, centre-right Forza Italia (FI) party, said Tuesday. "Respect for other cultures cannot and must not equal the negation of ours. This is not respect, it is the cancellation of differences or, worse still, submission. "It's confirmation that when (Premier Matteo) Renzi speaks of identity and integration, he is talking nonsense.
"You should not hide identity and there can be no integration if we don't value our identify". Rouhani met Renzi, President Sergio Mattarella and other institutional figures on Monday, when Italy and Iran signed 17 different agreements.
He met Pope Francis in the Vatican on Tuesday and discussed the recent accord on Iran's nuclear programme and Iran's role in helping solve conflicts in the Middle East, among other issues. Matteo Salvini, the leader of the rightwing Northern League, said covering up the statues in the Capitoline Museums was "madness" and blasted Renzi welcoming a man "who would like to wipe Israel from the face of the Earth".