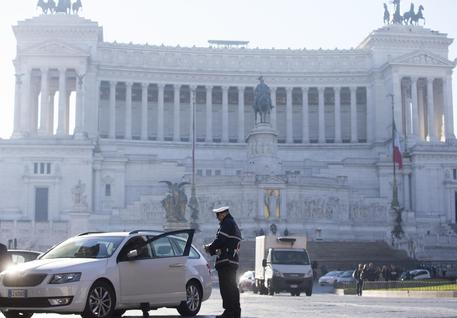 (ANSA) - Rome, December 28 - Rome and Milan - joined by Florence, Bologna and other cities - again battled dangerously high smog levels Monday ahead of a government summit scheduled for Wednesday.
Meteorologists said there was no chance of cleansing rain to ease the situation until at least the New Year.
Drivers with license plates ending in uneven numbers were banned from the taking to the roads of the nation's capital as authorities tried to bring down the smog levels.
In Milan, where 1,500 checks resulted in 300 fines, the city streets were eerily silent as 200 traffic cop patrols made sure all private vehicles stayed off the roads in a total ban.
Florence Mayor Dario Nardella, meanwhile, banned cars from the city centre until December 31.
Other northern cities including Bologna, Modena and Bergamo took similar measures.
Rome Commissioner Francesco Paolo Tronca decided to ban traffic in the capital for six hours on Monday and Tuesday in a bid to reduce pollution levels that are above the legal limit.
Private vehicles are banned from travelling in the city's Fascia Verde (Green Zone) from 10:00 to 16:00 on those days.
Milan announced it was adopting a similar ban for three days this week, from Monday to Wednesday.
The towns in the Milan metropolitan area are also taking part.
Low pollution vehicles, such as hybrids, methane-powered, LPG or Euro 6 cars and Euro 2 scooters, are exempt from the Rome ban.
Tronca's order also limits heating in homes and offices to 18 degrees centigrade.
On the days of the ban a 1.50-euro ticket to use buses, trams and the metro in Rome will last all day instead of the usual 90 minutes.
Rome has tried on several occasions to reduce smog levels by banning cars with number plates ending in an odd number from travelling on one day and then banning those ending with an even number the next, but the results have been disappointing.
The situation has been made worse by a lack of rain in recent months.
Milan has been over the legal smog limit for 85 days this year, Legambiente environmental watchdog group said earlier in December.
The legal limit is 35 days a year of pollution with more than 50 micrograms per cubic metre of particulate matter (PM10).
Particulates are the deadliest form of air pollution due to their ability to penetrate deep into the lungs and blood streams unfiltered, causing permanent DNA mutations, heart attacks, and premature death, according to the US Environmental Protection Agency (EPA).
The World Health Organization has designated airborne particulates a Group 1 carcinogen.
Turin is the next worst offender with 73 days over the limit followed by Naples with 59 and Rome with 49 days, Legambiente said.
On the weather front, those looking for a reprieve thanks to some needed rain were disappointed Monday.
A stationary high pressure front will keep the weather mild and the smog alert high for much of this week, forecasters said.
Temperatures are expected to drop sharply beginning on Thursday.
Precipitation - which cleans the air of smog - is not expected until the beginning of January 2016.
Meanwhile, after the anti-establishment 5-Star Movement accused the government of "murdering" some 68,000 "extra" smog victims, Left Ecology and Freedom party (SEL) leader Paolo Cento lashed out at the government Monday for "defaulting" in the face of the smog emergency, saying cars should be banned in Rome for two weeks.
"The smog emergency - which has been going on for weeks not days - is also a health and economic emergency costing 15 billion euros a year," Cento said.
"A rain dance is not enough, we need planned measures in the immediate and medium term," he added.
Environment Minister Gian Luca Galletti has called Italian mayors and regional governors to the environment ministry Wednesday.