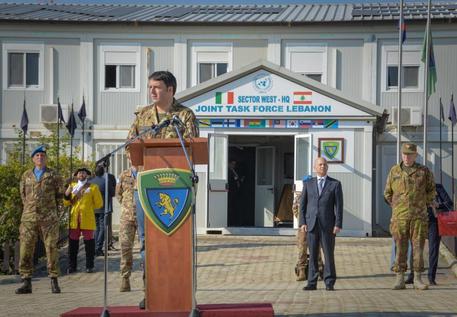 (ANSA) - Rome, December 22 - Premier Matteo Renzi on Tuesday paid a pre-Christmas visit to the Italian blue helmets serving in the United Nations UNIFIL mission in the south of Lebanon, close to the Israeli border, while Italian Senate Speaker Pietro Grasso arrived in Baghdad to address Italian soldiers serving in Iraq and hold a series of meetings with the Iraqi authorities.
Renzi met with Lebanese Prime Minister Tammam Salam during his visit, who told reporters at a joint press conference that his country needs Europe's help in dealing with masses of refugees fleeing the civil war in Syria, which has been tearing the country apart since 2011.
"We request the support of Europe and Italy in the face of the enormous flow of Syrian refugees," Salam said.
Renzi emphasized the sharp contrast between the number of asylum seekers entering Italy and those entering Lebanon, and said the 150,000 asylum seekers who reached Italy on migrant boats this year are not an "invasion" in a country of 60 million inhabitants, as some rightwing politicians are calling it.
"There's a minority of Italian political parties who create controversy saying that there's an invasion of migrants," Renzi said.
"But Lebanon is 15 times smaller than Italy, it has four million residents - not 60 - and yet it welcomes...1.5 million refugees, 10 times the number accepted by Italy this year. This gives a sense of the proportions".
"We shouldn't pretend nothing's happening, but the slogans need to stop and concrete action needs to be taken to face the refugee problem," Renzi said.
Renzi also visited a UNICEF school for Lebanese and Syrian refugee children aged 4-11 that was renovated with Italian funds, as was a wing of the National Museum, which Renzi also visited earlier in the day.
"If we don't invest in education and knowledge, we risk delivering an entire generation to extremism and fanaticism," Renzi wrote on his Facebook page.
Meanwhile, Senate Speaker Pietro met with Carabinieri military police and their Iraqi trainees at Camp Dublin outside Baghdad.
"As an Italian I am proud of the way you represent Italy," Grasso told the Italian troops.
After meeting the Speaker of the Iraqi Parliament Salim Al Jabouri, Grasso urged international cooperation.
"It has never been so urgent for the whole international community to be united and cooperate to find a common political and diplomatic solution to combat Daesh (ISIS in Arabic), and the terrorism that represents a threat to civil coexistence," Grasso said.
"Italy has a fundamental role in the coalition against Daesh, where it represents the second-largest country in terms of numbers on the ground, with about 700 men".
"We are committed to the fullest here and we will continue to be so," Grasso said.
While in the Iraqi capital, Grasso also met with the Chaldean Catholic Patriarch of Baghdad, Monsignor Louis Sako, who said he is "seriously concerned" about the rise of Islamic fundamentalism in the country.
"We're afraid for the political future of the country," Sako said, citing cases of intolerance against Christians including a law in which the children of those who convert to Islam automatically become Muslims.
Sako said the law is "a violation of the Constitution and an infringement of human rights", but added "here religion matters a lot in politics, so I'm not optimistic".
However Iraqi President Fouad Masum has sent the automatic religious conversion law back to parliament for debate.
Iraqi Parliament Speaker Salim al-Jabouri also confirmed that the law would go back to the floor for discussion and said several MPs wish to eliminate the article regarding the automatic conversion of children.