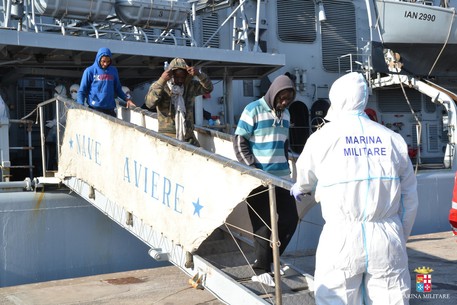 (ANSA) - Brussels, December 14 - The European Commission on Monday asked Italy to take migrants' fingerprints by force if necessary, and to hold anyone who resists attempts at identification, according to a report ANSA saw Monday.

The report also said only one of six designated hotspots, or migrant identification facilities, are operational in Italy. "The Commission expects two more (hotspots) at Pozzallo and Porto Empedocle to be opened within days," according to the report to be published Tuesday.

Interior Minister Angelino Alfano earlier defended Italy's migrant and refugee facilities amid calls from Brussels for Italy to "do more" to identify the newcomers.
The European Commission said last Thursday that it has opened an infringement procedure against Italy for failing to respect the rules on the collection of the fingerprints of asylum seekers upon entry into Europe.
Greece and Croatia have also been hit with the procedure.
The move regards the alleged failure to correctly implement the Eurodac Regulation, which demands the fingerprinting of asylum seekers and transmission of data to the Eurodac central system within 72 hours.
"We are intransigent on the photographing and fingerprinting of migrants," Alfano said.
"We are close to 100%".
His comments came ahead of a meeting in Milan with EU Immigration Commissioner Dimitris Avramopoulos over the infringement procedures.
"Europe open a procedure of thanks instead, because had we not saved thousands of lives Europe would now be covered in...shame," Alfano added. On Tuesday Brussels is expected to publish a report on the steps taken by Italy and Greece to set up so-called 'hotspots' for identifying and sorting migrants and refugees. Of the six hotspots planned for Italy only one has been created so far, sources in Brussels said. Meanwhile German Chancellor Angela Merkel said Monday she "expected Italy and Greece to create the hotspots and to do so in such a way that migrants are not only registered, but also redistributed or sent home".