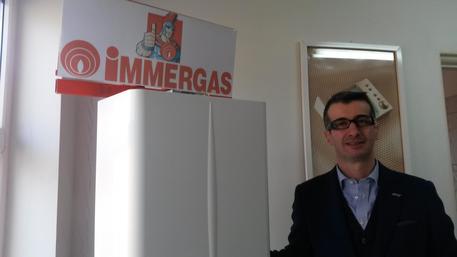 (ANSA) - Rome, December 1 - Italy's Immergas set up shop in Iran in the "annus horribilis" of 2011, the worst year for sanctions against the country. The company weathered the storm, however, and now both population and residential building are growing in Iran, as is demand for domestic boilers. Immergas has a turnover of 300 million euros per year and is headquartered in Brescello, with production facilities in Italy and Slovakia. It entered Iran in 2009 at the commercial level and two years later opened a factory in Qazvin, about 150 kilometers from Tehran. "It wasn't to delocalize," said Immergas chief Pars Roberto Masarin. "It was to take advantage of opportunities abroad and to bring jobs to Italy, where most of the finished boilers are made as well as components for production abroad." Masarin, who has been working in Iran since 2007, said that there is Iranian industry in this field but that the listed company founded in 1964 by the Amadei and Carrara families offers better safety standards and energy saving. For now, the facilities produce about 80 pieces a day with about 15 employees. In pointing to growth potential, Masarin showed on a graph that from 2000 to 2010 there was 5.2% average growth. While it is true that the sanctions had a negative effect on the economic data, the lifting of the embargo will bring back growth, though not immediately.
He noted that the sanctions led to a "atomization" in credit, and the system will have to re-adjust itself. Meanwhile, Iran has the 28th highest GDP in the world, he said, estimating that it could become one of the top 11 economies with the greatest growth potential. Believing in Iran and among the 370 participants of an Italian mission that ended on Monday evening in Tehran is also Valter Alberici, head of Piacenza-based Allied International, which produces connecting pieces for hydrocarbon extraction, distribution and transformation. "This is a very interesting market, and one we were operating in until 2005," Alerici said. The group is now ready to return to Iran since while in other countries low oil prices have interrupted investment, Iran needs to move forward for recovery at the technological level as well - which it was forced to fall behind on in these years. "We work everywhere, from China to the Middle East to Africa," he said, "but Iran is a young country with qualified human resources." Pleased with recovery on the horizon is also Flavio Marabelli, honorary president of Confindustria Marmomacchine, which has signed a Memorandum of Understanding with the Iran Stone Association. The agreement is based on consolidated relations in a country that - he stressed - holds a great deal of interest both for its marble and granite resources and as a consumer of these materials in construction. "We are here to discuss operating projects," Marabelli said. "And we plan on returning between January and February."