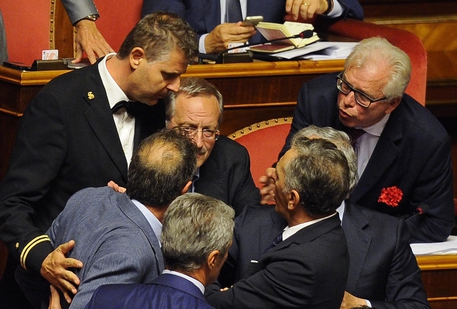 (ANSA) - Rome, October 2 - Socialist Senator Lucio Barani on Friday said he was sorry a gesture he made during debate on the government's Constitutional reform bill had been misinterpreted.
"I am truly sorry about what is happening in the Senate due to a misunderstanding generated by some instinctive gestures of mine," Barani said in a statement after leaving the Senate.
"With my hand turned to my own face, I was inviting those who were interrupting Senator Falanga to swallow the papers they were waving so vehemently".
Speaker Pietro Grasso suspended debate after Barani, who leads the Liberal-Popular and Autonomous Alliance (ALA) caucus, allegedly made an obscene gesture - reportedly miming oral sex - directed at anti-establishment 5-Star Movement (M5S) Senator Barbara Lezzi.
This caused women Senators from various parties to attack Barani, demanding he apologize.
The alleged culprit, however, at first insisted his gesture had been "misunderstood".
In his statement, Barani said "if (my gesture) was interpreted in an offensive way, I apologize to the women colleagues who perceived such gestures as being directed at them".