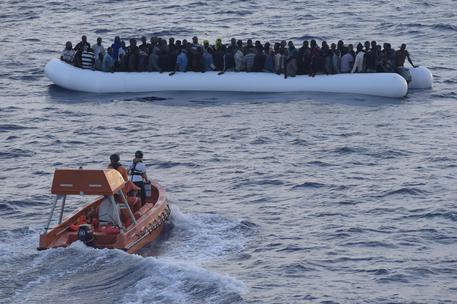 (ANSA) - Rome, September 1 - The European Court of Human Rights on Tuesday condemned Italy for deporting three Tunisians in 2011 even as anti-immigrant Northern League leader Matteo Salvini ridiculed the Catholic Church's welcoming position on migrants and a seemingly unstoppable wave of refugees continued to arrive on Italian shores.
In its ruling, the ECHR said Italy had "violated" the rights of the three undocumented Tunisian migrants. The men were rescued from the Mediterranean sea, taken to a detention centre on the stepping-stone island of Lampedusa and deported on the basis of an accord with Tunisia.
But the ECHR said did not have their "personal positions or rights" respected and must be compensated with 10,000 euros a head.
Hundreds of more migrants were picked up by ships in the Mediterranean Tuesday.
Four corpses were found on one boat, adding to an ever-mounting death toll.
More than 350,000 migrants and refugees have crossed the Mediterranean in search of a better life this year and some 2,634 people have died on the way to Europe, the International Organization for Migration said Tuesday.
In the whole of last year, according to the UN, 219,000 migrants and refugees arrived and 3,500 lost their lives.
Meanwhile as there were fresh major clashes between migrants and police in Budapest, Salvini took issue again with the Catholic Church's position that all comers into Italy should be welcomed with open arms.
Salvini, head of anti-immigrant Northern League took another swipe at the Italian Bishops Conference CEI, ridiculing its leader in his ongoing feud with the Italian Church over immigration policies.
CEI Secretary-General Monsignor Nunzio Galantino has criticised politicians who fuel anti-migrant sentiments, and has complained about the government's response to the Mediterranean refugee crisis. His comments have prompted harsh replies from Northern League members.
Salvini continued the clash on Tuesday, telling Radio Anch'io that he did not view Galantino as a bishop, but as a "joke".
"Luckily, the majority of the Church speaks very little and works a lot. I'm attacking those bishops that would want to run for parliament for the Communist party," Salvini said.
He also renewed calls for the Mineo refugee reception centre (Cara) near Catania - the largest in Europe - to be closed after a series of criminal incidents.
"There are countless investigations into that centre, and the local mayors all say it is an enclave of crime," he said.
Catholic daily Avvenire also waded in on the immigration issue on Tuesday, calling for an end to "racist hysteria" but agreeing that the Mineo centre needed to be closed after the string of incidents including a recent double murder allegedly by an Ivorian who escaped from it.
"Keeping 3,000 people in a reception centre long-term is madness," the paper wrote in an editorial.
The controversy over the Cara in Mineo has been heightened by a the murder of a local couple in which an Ivorian from the camp is the chief suspect.
Initial forensic results Tuesday said the woman victim, 70, may have been raped.
The anti-establishment 5-Star Movement also attacked the Mineo Cara on Tuesday, claiming that the junior government partner the New Centre Right had been milking it for both money and votes.
In other news Tuesday, it emerged that a European naval mission against human trafficking in the Mediterranean now aims to proceed to its so-called "Phase 2" in which it will actively hunt for traffickers in international waters.
Admiral Enrico Credendino, commander of EUNAVFOR Med, presented the proposal to pass to "Phase 2" to the permanent representatives of the EU's 28 member states last week. The proposal is set to be evaluated and potentially approved by the council of ministers of foreign and defense ministers scheduled later this week in Luxembourg.
The first phase of the mission involved identifying and monitoring migrant trafficking networks, while the second and third phase involve stopping, seizing and destroying migrant traffickers' boats.
EUNAVFOR Med works with Frontex, Europol and Eurojust EU agencies.
EU foreign ministers approved the launch of the first phase of EUNAVFOR in June The mission is part of the European Commission's Agenda on Migration, a response to Italy's appeals for help in dealing with the Mediterranean refugee crisis.