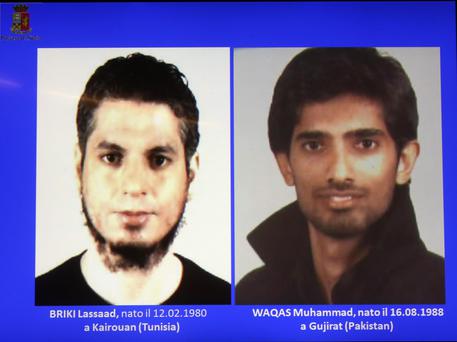 (ANSA) - Milan, July 22 - Italian police said Wednesday they arrested two suspected supporters of ISIS after they made threats against landmarks in Rome and Milan.
The alleged terrorists also spoke of hitting a military base in Ghedi in Italy's Brescia area, as well as high-profile targets in Italy, a Milan prosecutor said.
The two, one from Tunisia and one from Pakistan, had created a Twitter account called 'Islamic_State in Roma' and allegedly planned terrorist actions, posting messages with photos of famous Italian sites in the background.
"We are in your streets. We are everywhere. We are locating targets, waiting for time X," read some of the messages, written in Italian, Arabic and French.
Some were written on scraps of paper and held up before a camera with Rome's Colosseum and Milan's Duomo as well as its bustling train station in the background, implying these were terrorist targets.
As part of the investigation, police acquired wiretaps of conversations between the men, who communicated in Italian as that was they only language they had in common.
Investigators said the men were legal residents of Italy and had been living for years in Manerbio, a town in the northern province of Brescia.
The messages that the pair posted on the Twitter account first emerged three months ago, at the end of April, police said.

One of the two posted threatening messages on Twitter, prosecution documents showed.

"We're already in Rome," Briki wrote on his homar_moktar and homar_moktar2 Twitter feeds. "Our knives are sharpened and ready for slaughter," he wrote. ISIS has gained notoriety because of its numerous public beheadings carried out with large knives.

The pair also discussed how to make a home-made bomb as set out in a jihadi manual titled How to Survive in the West, prosecution documents showed. "This you can use to place something here...a bomb...like this," Waqas told Briki  in a May 16 wiretapped phone conversation. "Not now, some day we will," Briki replied. The jihadi manual "shows you little things such as how to make a home-made bomb," Waqas said in the wiretap.