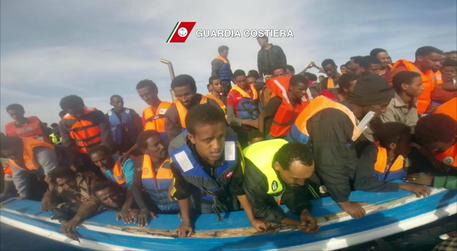 (ANSA) - Milan, June 12 - Italian Foreign Minister Paolo Gentiloni said Friday that the government is aware that it will have to fight at the European Union level to get more help in managing the Mediterranean migrant crisis. "It's necessary to work to steady the situation," Gentiloni said as he arrived at an Italy-Latin America and Caribbean forum in Milan. "The government is working and it seems to me that the situation is normalising. Then it's necessary to fight in Europe to obtain results".

EU member States are working to devise a "plan B" after deep divisions emerged over the European Commission's proposal for 40,000 asylum seekers in Italy and Greece to be relocated to other parts of the union, EU sources said Friday.
The sources said opposition from a minority bloc within the 28 member countries could stall approval of the EC's Agenda on Migration at an upcoming council of interior ministers next Tuesday.
Britain, Denmark and Ireland have availed themselves of an exception clause, another dozen countries oppose the measure and three have yet to express an opinion - including Latvia, which is the duty EU president until June 31. "All the States agree something must be done for the asylum seekers...but the mandatory nature of the Commission's proposed measures (is ruffling feathers)," the sources said.
Plan B would be "neither mandatory nor voluntary," the sources said. "A third way is being sought, and there are various possible scenarios".
"It will be done informally...no one is leading the process," the sources added.
"It's at the brainstorming level - no documents will be circulated, but there will be an exchange of ideas, to see the reactions".
The EC in May approved an emergency mechanism to relocate 40,000 Syrian and Eritrean refugees who were rescued in the Mediterranean after April 15 of this year. The key tests for the proposal will be the June 15 council of EU interior ministers and the June 26 summit of European leaders. The relocation mechanism is part of the Commission's Agenda on Migration, drafted in response to appeals for more help from Italy, which is bearing the brunt of the burden of the Mediterranean migrant crisis. The agenda also envisages the tripling of funding for search-and-rescue operations in the southern Mediterranean and the creation of a naval force to disrupt human smugglers.

European Commission spokesperson Margaritis Schinas said Friday the EC will defend its proposal for the mandatory relocation of 40,000 asylum seekers in Italy and Greece to other parts of the union "to the last word".