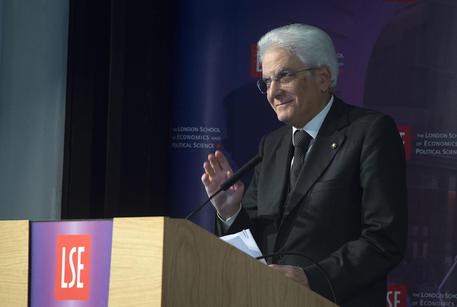 (supersedes previous)(ANSA) - London, May 28 - President Sergio Mattarella in a speech to the London School of Economics on Thursday made an impassioned plea for a united, cohesive, integrated Europe.
Fleeing from new challenges such as the migrant emergency would be nothing but "childish" and "inadequate, said the former Constitutional Court judge.
At the same time, Europe must speak with one voice in the face of potentially destabilizing crises across the Mediterranean. "Dangerous threats to our stability are coming from the Mediterranean area, and these require a strong, cohesive Europe that speaks and acts with one voice," he said.
"Stabilizing...Libya, or successfully contributing to the pacification of Iraq and Syria cannot happen without common, credible, and unequivocal European action," he said.
Europe needs a "coherent long-term vision for progressive integration". The migrant crisis is "an epochal emergency for its scale and its dramatic consequences, in the face of which Europe is just now beginning to develop a common policy," he said, adding his "great regret" is the EU took so long to start saving migrant lives. "Our great regret...is the delay with which the European machine got started," he said. "Too many deaths, unfortunately, have been necessary to awaken our collective conscience".
Mattarella called on Europe to abandon notions of military interventionism, as well as outdated notions of national rather than collective defence.
"The EU's capacity for inclusion is surely a more effective model for affirming the value of democracy than any unrealistic, recurrent temptations to export it by military intervention," he said. "We must progressively abandon the old paradigm of purely national defense and armament policies...and begin a gradual but irreversible process defense budgets coordination," he said.
Mattarella earlier in the day commented on Greece, which is engaged in tough bailout talks amid fears of a Grexit from the euro.
"I am confident the difficulties of Greece - which other European countries have also faced - will be overcome," he said.
Britain likewise is going through "a difficult time" concerning its future in Europe, and he hopes it will stay in the European Union. Mattarella, who visited Queen Elizabeth, said the decision is in the hands of the British people, who will vote in an in-or-out referendum by 2017 after Prime Minister David Cameron renegotiates the UK's membership terms. "It would be disrespectful not to take them into account," he said, joking that he did not feel as if he were entering "the lion's den" during his visit. "It is a friendly country that wants to stay in the European Union, and we hope to stay together".