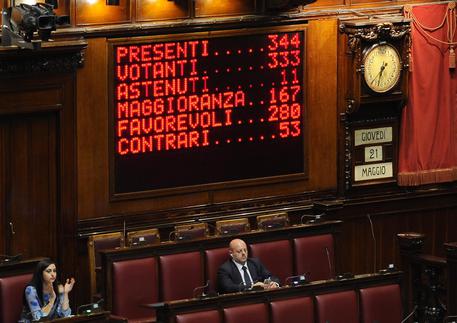 Earlier Raffaele Cantone, the head of Italy's anti-corruption authority, said the bill was to the "best possible" legislation.

"The new anti-corruption law makes Italy stronger," Justice Minister Andrea Orlando tweeted. "The corrupt and the corruptors betray our country...false accounting is back to being a crime punishable with severe sanctions".

"All the naysayers who bet on the objective never being reached" have been defeated, Orlando said earlier.

Premier Matteo Renzi, who is in the Latvian capital of Riga for a two-day Eastern Partnership summit,  hailed passage of his government's anti-corruption bill.

"Today's result on the fight against corruption would have been unthinkable just a few months ago," he said. "This is an important step, bringing politics closer to the expectations of Italian citizens".

"My thanks go out to those in government, in the majority and in parliament who worked to provide more stringent anti-crime measures," he added.