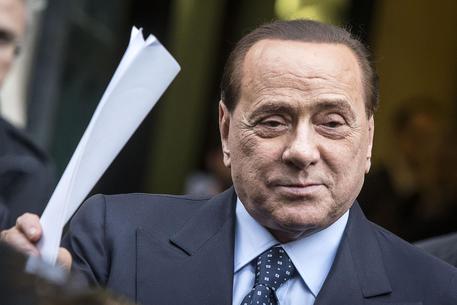 (ANSA) - Rome, March 11 - Silvio Berlusconi bounced back onto the political field Wednesday after Italy's top court upheld his appeals acquittal for paying an underage prostitute called Ruby for sex and springing her from a police station on the grounds she was Hosni Mubarak's niece.
Berlusconi said the truth had prevailed after the supreme Court of Cassation's ruling which paved the way for a "spring campaign" to revive his flagging political fortunes.
"The sentence has healed all fractures, in the party too...united we win, he said.
"Finally the truth," the three-time premier and leader of the opposition centre-right Forza Italia (FI) party said. "Today is a wonderful day for politics, for justice, for the rule of law. I was certain that my version would be recognised as right. "But the bitterness remains over an affair that has caused countless damage not just to me, but to all the Italian people".
A court of first instance had found Berlusconi guilty of the charges, sentencing him to seven years in prison. But in July a Milan appeals court acquitted Berlusconi of using underage prostitution by paying for sex with a Moroccan dancer called Ruby the Heartstealer, whose real name is Karima El Mahroug.
The supreme court's decision to uphold that ruling is the final word on the case.
"Now this sad page has been shelved, I'm back in the field to build a better, more just and free Italy with Forza Italia and the centre right," said Berlusconi, who recently completed a year of community service related to a conviction for tax fraud at his media empire.
FI has been hit by internal rifts recently and has dropped to fourth place in most opinion polls, having performed badly at last year's European elections and local elections since. "Naturally, I thank the magistrates who did their job without being conditioned by the media pressure and partisan interests," Berlusconi said. "What would be taken for granted in other countries, in Italy is a display of courage and independence that deserves respect and admiration... "I thank the lawyers who helped me, the people who are dear to me, my friends and assistants who have been close to me and supported me in recent years. "I thank political leaders from all over the world and the millions of Italians of all political sides who have expressed esteem and respect for me and did not believe the mud that was slung at me, including by institutions of the republic".
In its explanation of its decision, the Milan appeals court said it cleared the 78-year-old billionaire of the sex charge because it said there was no proof Berlusconi knew Ruby was 17 at the time - one year under the legal limit for sex workers. The court said "paid acts of a sexual nature" took place at parties at Berlusconi's Arcore home near Milan. It added that El Mahroug's "uninhibited habits and exhibitionist attitudes" were "perfectly compatible" with the so-called 'bunga bunga' sex parties that took place at Arcore.
The court said it had established there was "certain proof of prostitution at Arcore on the evenings when Karima El Mahroug took part (in the parties)". "She spent the night at least twice," it added. The supreme court also upheld the appeals court's decision to acquit Berlusconi of an abuse of office charge, related to a phone call he made to a Milan police station after El Mahroug was detained on an unrelated theft accusation in 2010. The appeals court had said Berlusconi was afraid of "the risk of compromising revelations" and had "a personal, concrete" interest in seeing she was handed over to then Lombardy regional councillor Nicole Minetti and not to a youth home. Minetti, a former dental hygienist of the ex-premier who was elected for his centre-right Forza Italia party, collected Ruby from the police station along with a Brazilian alleged prostitute who had contacted Berlusconi to tell him the girl was in trouble after being reported by a fellow alleged callgirl.
Berlusconi "did not threaten" police to get them to release Ruby by claiming she was the niece of former Egyptian leader Mubarak, the court said. It said this was why he was cleared of the abuse-of-office charge, for which he was sentenced in the first-instance trial to six years.
Berlusconi's legal woes have not ended, however.
His other cases include allegedly bribing Senators to switch sides, allegedly paying a businessman to keep quiet about escorts, and allegedly being involved in the publication of an illegally obtained wiretap.