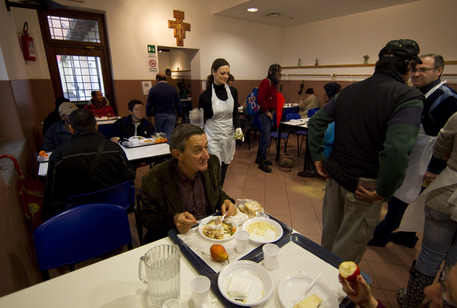 (ANSA) - Rome, February 19 - Two separate reports published on Thursday both painted an alarming picture of poverty levels in Italy after years of economic crisis.
Caritas Europa said in a study presented in Rome that over one in four people risked poverty or social exclusion in Italy, 28.4%, compared to a European Union average of 24.5%.
The crisis has had a huge social impact in Italy, hammering business and consumer confidence, while unemployment has doubled to around 13%.
Young people have been hit especially hard, with over four in 10 under-25s who are in the job market unable to find work.
Caritas Europa, the umbrella group for the national Catholic Caritas charities which run soup kitchens and shelters for the homeless, among other things, said Italy was among seven EU countries where the poverty risk was highest, along with Portugal, Spain, Greece, Cyprus, Ireland and Romania. "These statistics are absolutely dramatic and in part dictated by the fact that there are no jobs," said Annamaria Furlan, the head of Italy's second-biggest trade-union confederation, CISL. "The world has been governed by financial speculation for too long.
"We've forgotten that the only way to create wealth and spread it is to create jobs. We have to start talking about this again at once". Caritas said it had been necessary to double its efforts in Italy to help the poor over the last the last five years.
"In Italy Caritas's efforts are conducted via 1,148 anti-crisis initiatives," the charity said.
"The number of diocesis initiatives have doubled (+99%) since 2010". In its Noi Italia (We Italy) report based on 2013 data, national statistics agency Istat said that almost one in four Italian households is facing economic hardship. The report said that: "23.4 of families live in a situation of economic hardship, for a total of 14.6 million individuals".
Almost half of those families, or 12.4% of the overall total, were in grave economic difficulty in 2013, the report said. The positive note is that the overall percentage of households in hardship has come down from an even higher level of 24.9% in 2012.
Istat said over 10 million Italians, 16,6%, were in a state of relative poverty, meaning the income level is significantly below average. It said six million of them were unable to afford acceptable life standards.
Istat added that just 59.8% of the Italian population aged 20 to 64 was in work, with only Croatia, Greece and Spain doing worse in the EU. Italy is forecast to register modest growth of between 0.2% and 0.6% in 2015 by most organizations after ending the last three years with negative growth.