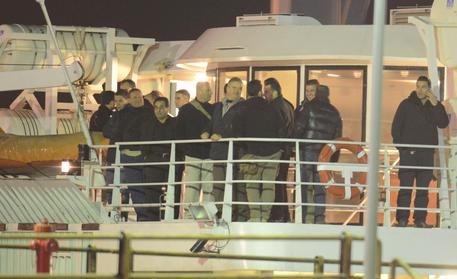 (ANSA) - Rome, February 16 - A group of around 60 Italians returned from Libya overnight after being evacuated because of security concerns about the advance of the Islamist jihadists in the North African nation. The group, including the ambassador to Tripoli, embassy staff and other Italians working in Libya, is set to land on an Air Force jet at the Pratica di Mare military base near Rome on Monday after being taken to the Sicilian port of Augusta by boat. On Monday Egypt launched air strikes against jihadists in Libya purporting to be linked to the Islamic State (ISIS) group after the released a video showing the beheading there of a number of Coptic Christian hostages. In the video, one of the jihadists warned Italy that ISIS was now "south of Rome" and not longer isolated to its bases in Syria and Iraq.
Italian Foreign Minister Paolo Gentiloni has said Italy would be ready to take part in a United Nations-mandated military intervention in Libya, the coast of which is just some 800 kilometers from the southern tip of Italy.
Pope Francis on Monday expressed his dismay at the murder of the Coptic Christians "I express my feelings today at the execution of the Coptic Christians," the pope said. "They were murdered just because they were Christians... in the land of Jesus the blood of our Christian brothers is a testimony that shouts, whether they by Catholics, Orthodox, Copts or Lutherans doesn't matter.
The blood is the same".

Italian Premier Matteo Renzi, meanwhile had a long telephone conversation on Monday with Egyptian President Abdel Fattah el-Sisi to discuss the war on terrorism and the situation in Libya, a government statement said. The leaders talked about the political and diplomatic steps to be taken at the United Nations Security Council to restore peace and security to the North African country. Renzi expressed his condolences and solidarity to Sisi over the murdered Egyptian Coptic Christians.