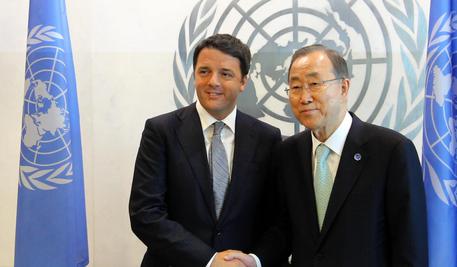 (ANSA) - New York, September 23 - Premier Matteo Renzi told a United Nations climate summit Tuesday that world leaders must come up with joint action to save the planet for future generations.
"We have the possibility of building a new world and a sustainable future for our children," Renzi told assembled world leaders, NGOs and representatives from all sectors of society that have gathered at the invitation of UN Secretary-General Ban Ki-moon.
But this, said Renzi, must be done together through common resolve.
"We must take joint action to stimulate sustainable growth", the premier said, to replace the current destructive use of natural resources and reliance on fossil fuels, which is poisoning the planet at ever greater rates.
The Greenhouse Gas Bulletin by the UN World Meteorological Organisation (WMO) showed that, far from falling, the concentration of carbon dioxide in the atmosphere actually increased last year at the fastest rate for nearly 30 years. "We must reduce carbon emissions through carbon pricing and energy efficiency, by tapping renewable energy sources, and by cutting back on fossil fuels," Renzi said.
As duty six-month president of the European Union, the Italian premier went on to say that the EU is sticking to Tokyo Protocol agreements, has agreed to a second, legally binding commitment to cut greenhouse gas emissions by 2020, and has already set itself new targets for 2030.
As far as Italy, as of August 45% of its electricity was being generated from renewable sources, and 22% of Italian companies invested in the environment.
Those are the companies that export the most, innovate the most, and create the most jobs, generating 40% of all new jobs last year, Renzi said.
The children of Beijing, Copenhagen, Coney Island and Shanghai "play on Italian-made amusement rides because they are pretty, because they are fun, but also because they consume less energy".
As well, leaders must find "a way out" of the damages already being caused by climate change, the Italian premier said.
This includes "mitigation, adaptation, and technology transfer".
"Italy is ready to contribute to the UN fund to fight climate change with a scientific endowment that will be commensurate with the extent of our commitment," Renzi concluded.
Also during his trip to New York, the Italian premier had bilateral meetings with Turkish President Recep Tayyip Erdogan, UN Secretary General Ban Ki-moon and Chilean President Michelle Bachelet.
After the climate summit, the premier lunched with Jordan's King Abdullah II and met with former US secretary of state Hillary Rodham Clinton as well as former US president Bill Clinton in the afternoon.