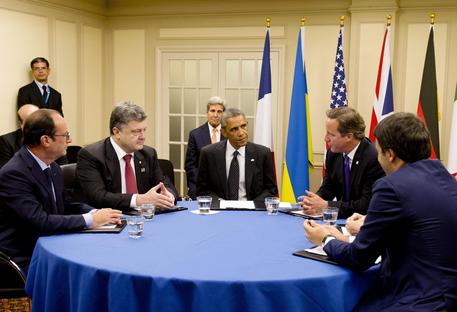 (ANSA) - Newport, September 4 - Italian Premier Matteo Renzi arrived in the Welsh city of Newport on Thursday for a NATO summit that is set to focus on the crisis in Ukraine and the threat of the ISIS Islamist group in the Middle East. NATO Secretary General Anders Fogh Rasmussen on Thursday described the meeting as a "crucial summit at a crucial time...
because the security conditions have changed dramatically".
Rasmussen added that the apparent olive branch Moscow had offered with a plan for a ceasefire was not being backed by actions, with support for pro-Russian separatists in the east of Ukraine continuing.
"NATO welcomes all the efforts for a peaceful outcome in Ukraine, but what counts is what really happens on the ground," Rasmussen said.
"Unfortunately after (Russian President Vladimir) Putin's so-called peace plan, we are still witnessing Russia's involvement in the destabilization of the situation in the east". The secretary general reiterated his call for Moscow to withdraw its troops from the border with Ukraine and stop supplying arms to the separatists. He also said that it was clear that Moscow had violated the NATO-Russia treaty, while stressing that "political and diplomatic dialogue" remained open with Putin's executive remained, even though "we have suspended all practical cooperation with Russia". Rasmussen also said Thursday that the organisation would consider any requests for help from Iraq, which is combatting ISIS Islamic rebels who have captured large areas of the country and committed a series of atrocities, including the beheading of two American journalists. "NATO has not received any requests for commitments in Iraq, but I'm sure that if the Iraqi government presented a request for assistance to NATO, the allies would seriously consider it," he said. Renzi was accompanied by Foreign Minister Federica Mogherini, who was nominated the EU's new High Representative for Foreign Affairs and will take over the role in November, and Defence Minister Roberta Pinotti.