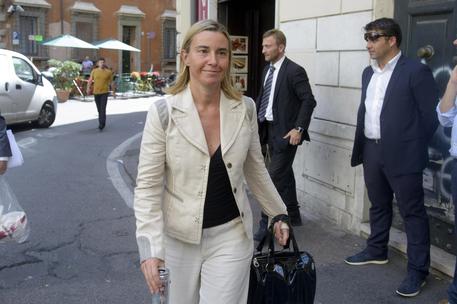 (ANSA) - Rome, August 1 - Premier Matteo Renzi has written to European Commission President Jean Claude Juncker to make official that Foreign Minister Federica Mogherini is Italy's candidate to be the EU's new high representative for foreign affairs.
Renzi lobbied for Mogherini to be given the job of replacing Catherine Ashton at a summit of EU leaders in June but there was no consensus and the decision of the top members of Juncker's commission was put of until another summit on August 30. The foreign-policy post is set to go to a representative from Europe's Socialist bloc, which Renzi's Democratic Party (PD) belongs to, as part of the deal that saw Juncker - the candidate of the centre-right European People's Party (EPP) - nominated as president of the European Commission.
But 10-11 countries are reportedly against Mogherini, above all Poland and other Eastern European countries, on the grounds that she is too inexperienced and may be soft on Russia.
Mogherini, 41, became foreign minister in February after Renzi unseated his PD colleague Enrico Letta to take the helm of government.
"Dear President, I wish to inform you that the Italian government has decided to nominate Federica Mogherini, the current foreign minister, as candidate for the role of high representative and vice president of the European Commission," Renzi wrote in a letter to Juncker.