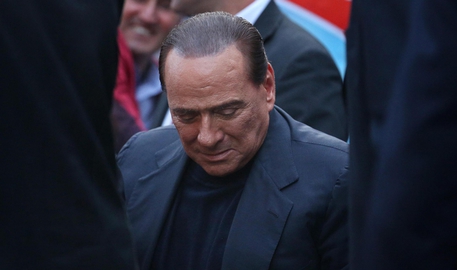 (ANSA) - Milan, April 15 - A Milan court on Tuesday accepted Silvio Berlusconi's request to serve the year remaining on his tax-fraud sentence by doing community service and said he should work at a facility for the elderly. It said the three-time premier and leader of the centre-right Forza Italia party will work at least one day a week, for "no less than four consecutive hours". Sources close to the 77-year-old billionaire told ANSA that he would be assigned to a centre run by the Fondazione Sacra Famiglia Catholic foundation at Cesano Boscone, near Milan.
The court also ruled that Berlusconi must stay in the region of Lombardy, although he will be allowed to go to Rome between Tuesday and Thursday each week. Berlusconi had already had to hand over his passport to the authorities after being given his first definitive conviction last year and has twice seen requests for it to be given back for trips abroad refused. Prosecutors had recommended the court agree to the request for community service.
The alternative was for the three-time premier to be put under house arrest.
The charismatic 77-year-old is too old to go to jail under standard Italian legal practice. The rest of the four-year sentence for fraud at his media empire was covered by amnesties. The Milan court said Berlusconi would do social work on a trial basis. Prosecutors warned last week that he will be put under house arrest instead if he defames magistrates.
The media magnate has repeatedly blasted judges in the past.
The billionaire has said the tax-fraud ruling, which led to him being ejected from the Senate in November, is part of a two-decade campaign by allegedly left-wing elements in the judiciary to erase him from Italy's public life.
The conviction has prevented him standing as a candidate in next month's European elections and from voting in them. In two separate cases, Berlusconi is also appealing a conviction for paying for sex with an underage prostitute and abuse of office that carried a life-time office ban; and is on trial for allegedly bribing a centre-left Senator to switch sides.
But last month a Milan court ruled that a one-year term for alleged involvement in the publication of an illegally obtained wiretap had timed out.