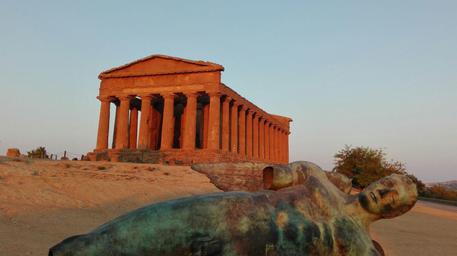 (ANSA) - Palermo, January 31 - The Valley of the Temples in Agrigento and the Ancient Theater of Taormina are among Italy's most-visited sites, above Turin's Egyptian Museum and Venaria Reale, the Reggia of Caserta, Hadrian's Villa and Villa D'Este in Tivoli, according to data released on Friday by the regional cultural department led by Sergio Alessandro. Siracusa was at the top with the la Villa del Casale of Piazza Armerina, the parks of Segesta and Selinunte and the Cloister of Monreale. The cultural ministry in recent days released a national ranking without including Sicilian sites, due to the region's autonomy in the sector.
Seven Sicilian locations were among the top 37 most visited destinations in Italy.
They included the archeological park of the Valley of the Temples in Agrigento, which in 2019 attracted more than 940,000 visitors, the Ancient Theater of Taormina, with just under 890,000 visitors, close to the colosseum in Rome, the Uffizi in Florence and the archeological park of Pompeii.
The archaeological park of Neapolis in Siracusa had nearly 700,000 visitors ahead of the archaeological museum of Naples, the Borghese Gallery in Rome, the archaeological park of Paestum, the Pinacoteca in Brera and the royal museum in Turin, registering significant growth also thanks to recent measures implemented by the regional government that has reorganized the system of archaeological parks.
"Sicily's culture and sites like archaeological parks, museums, galleries, libraries - stressed Governor Nello Musumeci - are a common heritage that needs to be preserved and valorized. They certainly are places that need to attract tourism and create a productive and employment cycle while being an integral part of the territory, its identity, and generate our community's civil growth".