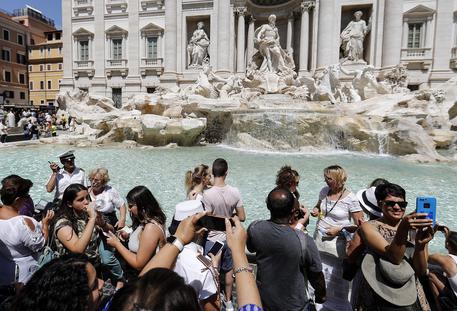 (ANSA) - Rome, January 24 - Barriers are to be put around the Trevi Fountain to stop tourists sitting on the iconic Roman monument, according to a majority amendment approved by the city council assembly on Friday.
"There will be a protective barrier for the basin of the Trevi Fountain that will prevent people sitting on the sides of the fountain," said the motion, proposed by councillor Andrea Coia of the ruling anti-establishment 5-Star Movement (M5S).
The motion calls on M5S Mayor Virginia Raggi and her city government to implement the move.
The motion also calls for action to prevent unauthorised street sellers hawking their goods in the access areas to the fountain and to the Colosseum.
The motion was approved with 24 ayes and one abstention.
It also urged "continuous patrols" in the Roman Forums, shopping areas Via del Corso, Via del Babuino and Via Condotti, and Piazza di Spagna, where the Spanish Steps are.
"There must be respect for the symbolic parts of Roma Capitale," said the motion.
Police have been banning tourists from sitting on the Trevi Fountain for about a year now.
But their efforts have sometimes been in vain.
Tourists sometimes try to climb up the fountain, or take a dip in it in homage to the famed scene between Marcello Mastroianni and Anita Ekberg in Federico Fellini's La Dolce Vita.