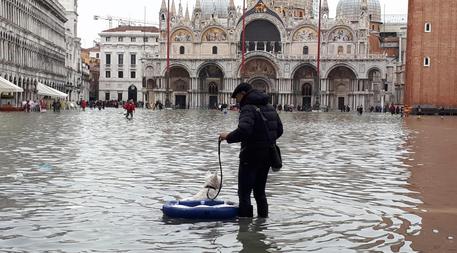 (ANSA) - Venice, December 23 - Venice was hit by 'acqua alta' or high water flooding of 144cm on Monday.
Some 60% of the ground in the lagoon city was under water.
A potentially critical acqua alta of 150 cm had been forecast, but winds off the Adriatic staved it off.
Levels of 100-120 cm above sea level are fairly common in the lagoon city and Venice is well-equipped to cope with its rafts of pontoon walkways.
But anything much above 120cm risks swamping much of the city.
Venice was brought to its knees on November 13 due to flooding in much of the city after the high-water mark reached 187cm, close to the level of the famous 1966 flood.
A 78-year-old man was electrocuted due a flood-caused short circuit at his home on the island of Pellestrina.
Another person also died.
St Mark's basilica and La Fenice theatre were among the buildings damaged.
The causes of acqua alta are both natural and man-made.
Decades of pumping groundwater caused significant damage to the delicate foundation before the practice was called off.
Weather experts say the high-water threat has been increasing in recent years as heavier rains have hit northern Italy.
Other possible explanations for the phenomenon include the sea floor rising as a result of incoming silt and gas extraction in the sea off Venice undermining the islands.
According to a recent study, plate tectonics are also to blame as the Adriatic plate is sliding beneath the Apennine Mountains, causing the area to drop in elevation.
Scientists have conceived various ways of warding off the waters since a catastrophic flood in 1966 and a system of moveable flood barriers called MOSE is near completion after years of controversy.
The final practical tests of MOSE, Venice's new flood-barrier system whose lack was lamented over the disastrous and deadly flooding, will begin testing next year, the Consorzio Venezia Nuova consortium has said.
Experimental raising of the barriers is already scheduled for the whole of 2020, it said, at a rate of one every 45 days.
There has been controversy over a failure to ready the MOSE project in time for the 187 cm tide that wrecked the lagoon city and killed two people.
The MOSE system must be finished despite its being already obsolete, Foreign Minister and anti-establishment 5-Star Movement (M5S) leader Luigi Di Maio said.
Projects like MOSE, which are currently due to be up and running in 2021, were "born old and stuffed with kickbacks and corruption but now, although it isn't the best possible solution, it must be completed as soon as possible to protect Venice immediately", he said.
"We won't pretend not to see where the blame lies," he said.
In September the updated 2018 balance sheet of the consortium building MOSE said the flood barriers will be handed over to the city council at the end of 2021 to protect the lagoon city from acqua alta or high water levels such as the 187 cm tide that hit Monday, the highest in 50 years.
The innovative and complex system of barriers, which cost 74 million euros in 2018 alone, will be completed at the end of June 2020, ushering in the final phase of testing.
Launched in 2003 and originally slated for completion in 2016, the MOSE project to build a system of retractable dikes has been at the centre of a slew of corruption scandals.
MOSE stands for MOdulo Sperimentale Elettromeccanico, or Experimental Electromechanical Module, and echoes Moses of parting the Red Sea fame.
The 5.5 billion euro (up by 1.3 billion form the first estimate) project is intended to protect the city of Venice and the Venetian Lagoon from flooding.
The project is an integrated system consisting of rows of mobile gates installed at the Lido, Malamocco, and Chioggia inlets that are able to isolate the Venetian Lagoon temporarily from the Adriatic Sea during acqua alta high tides.
Together with other measures, such as coastal reinforcement, the raising of quaysides, and the paving and improvement of the lagoon, MOSE is designed to protect Venice and the lagoon from tides of up to 3 metres (9.8 ft).
The Consorzio Venezia Nuova is responsible for the work on behalf of the Ministry of Infrastructure and Transport - Venice Water Authority.
Construction began simultaneously in 2003 at all three lagoon inlets, and as of June 2013, more than 85% of the project had been completed.