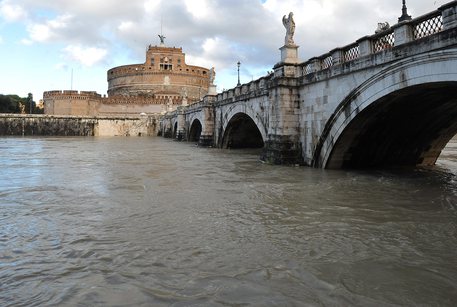 (ANSA) - Rome, June 14 - One of Rome's most historic monuments, Castel Sant'Angelo, is opening up spaces that were previously inaccessible to the public, including a series of rooms known as the Cambellotti Rooms, named for the artist who painted them in 1925, in the highest part of the castle. The monument will also offer new services to facilitate tourist visits and help visitors understand the castle's history through a smartphone app available in seven languages.
The app - available in Italian, English, Spanish, French, German, Japanese, Chinese, and soon in Russian - can be used during visits to highlight particular areas of the castle tell their stories.
A series of eBeacons, which are installed throughout the visitor pathway of the museum, can communicate with visitors through the app by automatically providing relevant audio and multimedia content as they move through the castle.
In addition, wifi will now be available in and around the monument.
Lazio Region Museums Director Edith Gabrielli said the developments will help overcome boundaries that previously hampered tourists' full comprehension of one of the most-visited tourist sites in Italy, with more than 1.2 million visitors per year. "It's very difficult to explain the castle's historic stratification, starting from its origins as the Mausoleum of Hadrian, then a fortress, then a Renaissance-era papal residence, then a prison and a torture chamber, and now, a museum," Gabrielli said. Tourists can visit Hadrian's burial chamber, following in the footsteps of those who brought the emperor's ashes to their final resting place, and move along the path of the walls, the papal apartments, Cagliostro's prison, along to the spectacular "Angel Terrace".
For the first time ever, visitors will also be able to exit from the ceremonial entrance designed by Giovanni Sallustio Peruzzi, son of the famous architect Baldassare Peruzzi, to reach the Cambellotti Rooms.
The three rooms were restored in 1925 to host Italian Army memorabilia and were painted and frescoed by one of the most renowned Liberty-era artists, Duilio Cambellotti. "Cambellotti, who was known as a master of sinuous and floral design, decided on this occasion to try his hand at military themes," Gabrielli said.