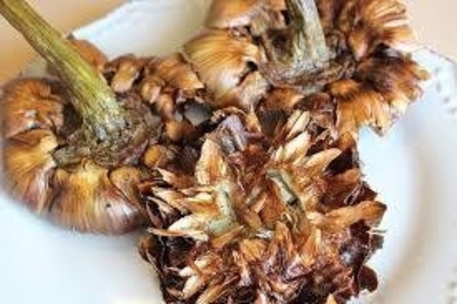 (ANSA) - Tel Aviv, April 5 - The 'Jewish-style artichoke' or 'carciofo all giudia', one of the symbols of Roman-Jewish cuisine, has sparked a dispute between Israeli rabbis who say it is not kosher and the Roman community that is fighting their threatened import ban.
The Israeli rabbinate, Haarezt reported, says this version of the artichoke should be banned from Israeli restaurants because small worms or parasites present in the vegetable mean it is not kosher.
The Roman Jewish community is standing its ground on its beloved dish, saying the 'artichoke war' reported by the Israeli daily "does not exist" because the special Roman-Jewish cooking guidelines rile out the possibility of any impurity.
But the rabbis were adamant that the dish should be off the menu.
The head of the import division of the Israeli Rabbinate, Yitzhak Arazi, said "the heart of the artichoke is full of worms and there's no way you can clean it.
"It can't be kosher.
"That's not our policy, it's Jewish religious law".
Some members of the Milan Jewish community have latched onto the warning and asked for it to be taken off the menu there too, to be on the safe side, Haaretz said.
But Roman Jewish sources told ANSA: "All plants can be infested, but there are those that are more at risk. The fitness of the Jewish-style artichoke comes from "two peculiarities: the product itself, and the way it is cleaned. Roman Jews have got both of those on their side.
The artichokes used in Rome are 'Roman' and have a narrow stem that stops worms getting in, they said.
The, the way of cleaning them after rinsing them in lemon water before frying them to a crisp "makes sure there is no contamination".
"Roman Jews know very well what artichokes to choose and how to prepare them," the sources told ANSA.
The artichokes in Israel, they insisted, are a different quality and prepared in a very different way.
The Roman community also stressed there was no war ongoing between the two Rabbinates because "we are talking about very different products and ways of cooking".
Despite the fuss, no one is prepared to give up the carciofo alla giudia in Rome.
In a recent video wishing the Roman Jewish community a Happy Passover, a time when the artchoke holds pride of place on Jewish dinner tables, from Chief Rabbi Riccardo Di Segni and the head of the Roman Jews Ruth Dureghello, both of them are seen cleaning artichokes and preparing them for the traditional dish that has earned worldwide fame.