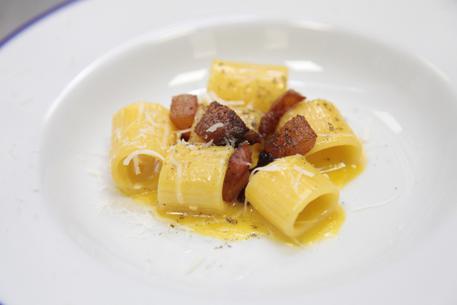 (ANSA) - Rome, April 6 - Italy on Thursday marked 'Carbonara Day', celebrating the famed egg-and-bacon-sauce spaghetti dish amid a heated debate on the 'real' recipe and way of cooking it.
Carbonara is perhaps the most loved and imitated pasta dish in the world but also the most controversial.
Purists say that only pork tongue and not bacon or even pancetta should be used, while enthusiasts are about evenly divided over whether to add pecorino or parmigiano cheese.
Other divisive issues are whether to leave the egg white in with the yolk and whether to add garlic or onion, and whether short pasta such as rigatoni can be used instead of spaghetti.
#CarbonaraDay has been organised by the International Pasta Organization (IPO) and the Association of Pastry and Pasta Makers (AIDEPI).
Follow the hashtag and you can join a debate that will see bloggers, food influencers, journalists and chefs have their say on the dish and more generally on the relationship between tradition and innovation or fusion in cuisine.
Italian traditionalists insist there are only five carbonara ingredients: pork tongue, pecorino, eggs, salt and pepper.
Innovators think that, since pasta is such a versatile dish, there should be no limits on how carbonara can be interpreted, going as far as culinary science fiction, according to detractors.