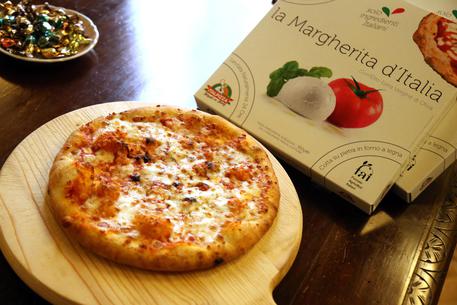 (ANSA) - Rome, April 14 - Frozen pizza giant Italpizza and a group of agricultural producers promoted by farmers' association Coldiretti have reached an agreement to produce a pizza made entirely from ingredients sourced in Italy, it emerged Tuesday.
The pizza, to be made by the company founded near Bologna in 1991 from ingredients sourced through the Filiera Agricola Italiana (FAI), aims to contrast a growing tendency to source the ingredients for pizzas made in Italy from abroad.
Today 63% of pizzas made in Italy "are obtained from a mix of flour, tomato, mozzarella and oil coming from thousands of kilometres away, without any indication for consumers," Coldiretti said.
At the same time, many consumers have stopped going to the pizzeria or go there less often as a result of the economic crisis, preferring to eat pizza bought frozen and cooked at home. The accord between Italpizza and FAI was presented during a meeting with Coldiretti president Roberto Moncalvo during a tour ahead of the food-themed Milan Expo 2015.