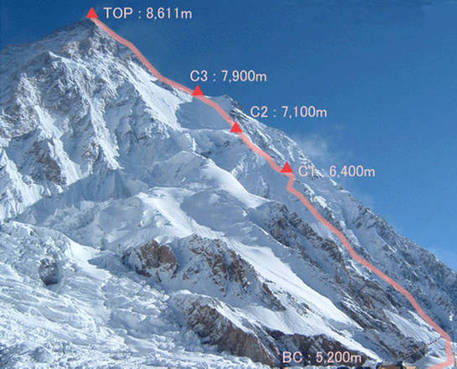 (ANSA) - Turin, February 15 - The Moncler down jacket worn by Ugo Angelino during Italy's historic conquest of K2 in 1954, the only one known to exist from the glorious enterprise, will be up for sale on 28 February at Aste Boalffi's website astebolaffi.it, together with other memorabilia, posters, furniture, and collector's items for winter sport enthusiasts.
For the first Italian auction dedicated entirely to the mountains, Aste Bolaffi proposes a catalogue of 81 carefully-selected lots that are able to recount the attraction of the mountains in all of their variations.
The memorabilia from the K2 expedition are items of undisputed historical and symbolic value. K2 was conquered on 31 July, 1954 by Achille Compagnoni and Lino Lacedelli, with a crucial contribution made by both the young Walter Bonatti and the Pakistani Amir Mahdi as well. But the expedition led by Ardito Desio, which was both a great athletic triumph and a symbol of Italian rebirth in the post-war period, went down in history as a success of the entire group that took part in it.
The Moncler down jacket was worn during this expedition by Ugo Angelino, one of the "13 heroes" to whom the newly-founded French maison supplied the technical gear for the expedition. The blue down jacket worn by the Biellese mountaineer at least until the seventh camp was the first one patented with the consultation of the great mountaineer Lionel Terray. Rediscovering the thermic properties of the down jacket, Terray developed a specialized line for high-altitude missions, officially tested by the Italians on the Karakorum mountain range. With the inner label "Modèle réalisé sous la direction technique de Lionel Terray" and the handwritten inscription of Ugo Angelino, the Moncler is valued between 40 and 50 thousand euros.
Some other items from Ugo Angelino's private collection that will be very interesting to enthusiasts include two original 16 mm copies of the renowned film Italia K2 (1955) by Marcello Baldi featuring high-altitude shots by Mario Fantin, some autographed photographs of the participants in the expedition, a commemorative ice axe produced by Grivel dedicated to Angelino, and the boots worn by the mountaineer in 1954 (starting prices from 500 to 2,000 euros).
There are also some very famous Alpine shots, from the Alps to the Himalayas, taken by Vittorio Sella included in the auction. Sella was a pioneer of high-altitude photography and produced some of the most incredible mountain photo features of all time.
The catalogue also includes a collection of photographic and biographical material that documents the Alpine activities of Julius Kugy and Wladimir Dougan (starting price 3 thousand euros), a very fine selection of posters, such as the iconic Sestriere by Mario Puppo (starting price 4,500 euros), and two posters by Carl Franz Moos, among the most sought-after mountain posters by collectors: St. Moritz and Sportbekleidung Fritz Schulze (starting price 3 thousand euros each). Paintings, furniture from the seventeenth and eighteenth centuries, and small sculptures are also included in the catalogue.