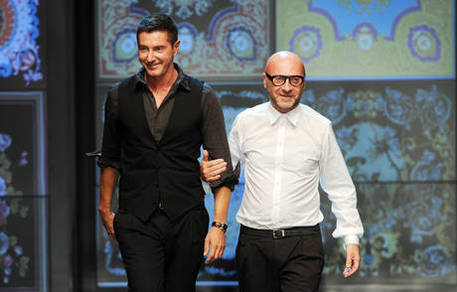 (By Valeria Robecco).
(ANSA) - New York, December 10 - Hollywood-style glamour provided the background for Dolce and Gabbana's fashion at an award ceremony of La Fondazione NY, a New York-based foundation helping young artists and intellectuals in the US and Italy find support for their work.
The Italian fashion designers were honoured together with filmmaker Baz Luhrmann at the third edition of the Gala event organized by the foundation at the Museum of the Moving Image at the Kaufman Astoria Studios in New York.
''We live with movies - our inspiration all the time is movies and we make our collection like a movie,'' Stefano Gabbana said during the event, where a number of costumes by the Atelier Tirelli debuted ahead of the exhibit 'Costumes for Cinema from Tirelli Atelier' opening in June next year.
The black-tie fete also celebrated the designing duo's curation of the site's upcoming Tirelli exhibit.
Founded in 1985, Dolce & Gabbana is today a leading international luxury label.
''We don't love social life but we could not say no to this event linked to Italy as we are very patriotic'', Domenico Dolce told ANSA.
''It is something we carry in our hearts, a country of excellence in food, fashion and cinema,'' continued Dolce, praising La Fondazione's work.
The foundation's achievements are ''extremely admirable and that is why I have just asked to become a board member,'' he revealed.
Award-winning Australian filmmaker Luhrmann, whose cult movies include Romeo + Juliet, Moulin Rouge, Australia and The Great Gatsby, praised Italian culture during the award ceremony saying he has been vastly influenced by Italy in his work.
''We owe much to the history and culture of Italian cinema'', he said.
The foundation's co-founder and chairman, Riccardo Viale, explained that ''each year La Fondazione NY gives an award to those who have contributed to Italian and US art, through their work and success''.
The foundation's president, production designer Dante Ferretti, stressed that the event also focused on encouraging more dialogue on Italian arts and culture in the US.
''The show on the Atelier Tirelli represents an example of the virtuosity of Italian craftsmen in the world of cinema through the design of costumes, the majority of which were never exhibited in the United States,'' said Ferretti, who took the helm of the organization after designer Massimo Vignelli died last May.
Over 40 costumes from cult films including Luchino Visconti's The Leopard and Death in Venice, Sofia Coppola's Marie Antoniette, and Martin Scorsese's Age of Innocence will be on show. Umberto Tirelli opened his film costume atelier in Rome in 1964 with just two sewing machines.
It soon became the favourite atelier of top directors including Visconti and Fellini.
Though Tirelli himself died in 1990, his team has carried on his work, making costumes for several movie hits, including Age of Innocence, Marie Antoniette and Anthony Minghella's English Patient, all of which won Oscars for costume design.