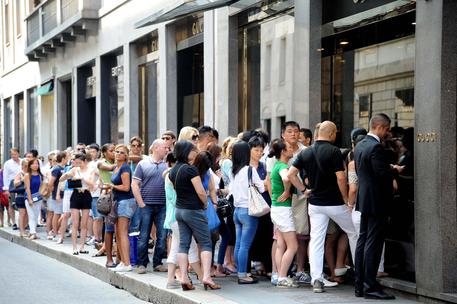 (ANSA) - Rome, September 15 - Retailers in Italy may need to learn to speak Chinese, as the number of shoppers from that country jumped by 18% in the first six months of this year, a national organization said Monday.
The Italian Fashion Federation reported that the jump in Chinese shoppers between January and June helped to offset a 13% decline in spending by tourists from Russia over the same period.
Russians had previously been the single most important foreign shoppers in Italy, said the organization.
That may reflect economic sanctions imposed by Europe and North America against some parts of the Russian economy over Moscow's role in the conflict in Ukraine.
Overall, the fashion industry reported a small drop of 1% in earnings in the first half of this year compared to the same time last year, the federation said.
Sales in the less-expensive accessories sector showed the only signs of annual growth, rising by 6.7% between January and June.
"The budget balance for the first half of the year for fashion shops was still bleak," said Renato Borghi, president of the fashion federation. "You cannot reverse the trend of losses on our invoices for at least the past three years," he added.
Even measures such as an 80-euro monthly tax bonus for low-income Italians introduced in the spring by Premier Matteo Renzi has been of little help because so many of those receiving the bonus must commit almost half their income to fixed expenses, he added.
Among the hardest-hit fashion items in the first six months of this year were fur garments, which dropped almost 11% and leather luggage, down 13%.
At the same time, spending on clothing has been falling across most of Italy, with an average drop of 10% compared with the same time last year.
One exception was the northern Trentino region where fashion spending rose by 6% in the first six months, said the group.
When people do shop, they are more likely to pay cash rather than using their plastic - credit card purchases fell by 3.4% compared with one year earlier.
Still, the very high-end fashion houses do not seem to be suffering but are keeping pace with rising rents on the most stylish streets, according to the federation.
Chic boutiques in Milan, Rome, Venice and Florence, are paying rental rates of as much as 670,000 euro per year per 100 square meters - the price for a premium spot on store on Milan's Via Montenapoleone.
Second spot went to Rome's storied via dei Condotti, where annual rents run at 650,000 euro for 100 square meters.