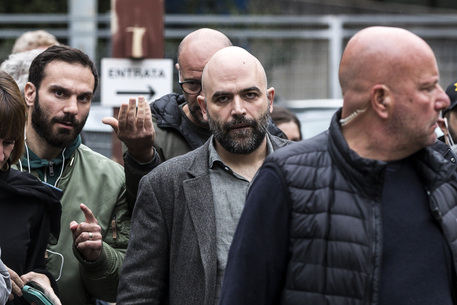 (ANSA) - ROME, NOV 23 - Anti-mafia writer Roberto Saviano said Wednesday that he was postponing two upcoming public events in Reggio Emilia because he does not feel "shielded" amid an onslaught of abuse.
"After weeks of continual attacks, I am pulling out due to fear of exposing you and those who host me (to risks): a responsibility I feel to be highly burdensome," he said in a letter regarding the events scheduled to take place at Reggio Emilia's Teatro Valli on Sunday and Monday.
"I feel it all the more because I see that those who could take sides from positions of strength by expressing an opinion are distant light-years away and, instead, remain silent," added the author of the Gomorrah expose.
"I am pulling out now because it is difficult for me to take part in public events at the moment.
"I am worried about putting myself and those around me at risk of physical exposure because the hatred is tangible and there is no shield".
Saviano has been in police protection since the publication of Gomorrah in 2006 lifted the lid on the Casalesi clan of Campania's Camorra mafia.
The book was turned into a 2008 film that won second prize at Cannes and was the inspiration for a successful Sky TV series.
Last week a trial in which Saviano is accused of defaming Premier Giorgia Meloni started in Rome.
Saviano called the leader of the right-wing Brothers of Italy (FdI) party a "bastard" when talking about the issue of migrants on a TV show in December 2020.
He said the same thing about League leader Matteo Salvini, the current deputy premier and infrastructure minister who has requested to be a civil plaintiff in the trial.
Prosecutors opened a criminal investigation after Meloni, who at the time was in the opposition, filed a complaint.
Press freedom groups have criticised the trial and the fact that defamation is a criminal offence in Italy.
The writer also faces a separate trial for having called Salvini the "minister of the underworld" on another occasion.

Culture Minister Gennaro Sangiuliano has taken legal action against him too.
He said that Sangiuliano has also threatened another suit over recent criticism for a total of five legal cases mounted by ministers in the current government.
"Anyone would be paralysed in my position," Saviano said.
"The far-right newspapers, in some cases paid directly by figures from the ruling majority in parliament, are engaged in 'squadrismo' (Fascist thuggery) on a daily basis.
"On the one side, you have the ferocious behaviour of defamation, of isolation, while on the other there is prudence, distinctions, clarifications, fear, convenient silence.
"This creates solitude.
"Luckily, I know I'm not alone: I feel the solidarity of my readers, of those who support my ideas and of some of my colleagues, the most courageous ones (few writers are).
"I feel it and I'm worried because I seriously fear that those close to me could be subjected to across-the-board vendettas...
"Those who should defend spaces of freedom and democracy are busy hiding the rubble of a political, cultural and intellectual path that has not been able to build bridges, only disintegration".