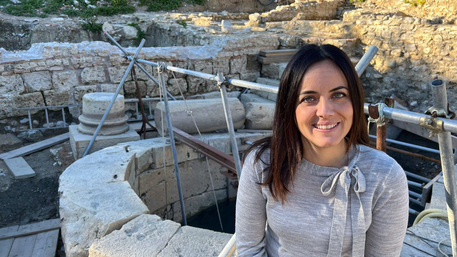 (ANSA) - SAN CASCIANO DEI BAGNI, NOV 8 - (By Silvia Lambertucci) "What can I tell you, for us here at San Casciano the amazing discovery that has come from the archaeological excavations at the Great Bath is a dream come true".
In her leather jacket and boots, Mayor Agnese Carletti has a confident stride as she moves between the mud and the stones of the excavation site which has been bringing to light the remains of sacred Etruscan and Roman baths for the last three years in the countryside outside this Tuscan village. Mayor Carletti is talking about young people and she knows what she is talking about: she too, just 37 years old, has been running her town's administration for the last eight years, with a degree in philosophy and an infectious passion for challenges, has ahead of her a future that is all there to be built.
And it is a future in which the discovery of these pages of history from 2300 years ago has a markedly important weight.
Because this town has invested a lot on the wager of rediscovering the oldest baths - a town which still today relies a lot on spa tourism, so much so that it restored the baths that the Medicis frequented in the 1500s. And behind what today appears a challenge that has been overcome, there is also a story of women, of solidarity between the generations and a provincial community that is struggling but will not give up.
With no more than 80 residents in its magnificent historic centre, and in all 1,550 souls scattered around the countryside of its three districts, San Casciano dei Bagni, says the first citizen who was elected for the centre-left Democratic Party (PD), is a small town with all the problems that are common to deep Italy: a distant hospital, a shortage of services, poorly repaired and inadequate roads, and depopulation.
There are olives and wine, of course. But the main economical force here is tourism, which guarantees around 60,000 people a year with a season that is made longer by the presence of the spa waters. An asset that is not enough, because more and more shops have been closing with each passing year, only two restaurants have remained open, and even the bar is shuttered up.
"But we haven't given up," smiles the mayor as she introduces her vice-mayor Fabiola Ambrogi, who has in the past served as head of the town's administration too. And then there is Irene Picchieri, who leads the archaeological group, Ada Salvi who is head of the superintendency, and Federica Damiani who works in Milan but dreams of returning here. Federica is also the soul of La Terrazza, a festival which since 2016, every summer, has brought politicians, intellectuals, actors and scientists to San Casciano's main square.
They started by enlisting VIP visitors, the many who have second homes in these dreamy hills, from actor Sergio Castellitto and his wife the novelist and screenwriter Margaret Mazzantini, to former PD chief and ex Rome mayor Walter Veltroni, also a noted film critic.
Then, by word of mouth, many more came, from ex-premier and former European Commission chief Romano Prodi to virologist and political commentator Ilaria Capua, from actor Isabella Ferrari to starchitect Massimiliano Fuksass.
"We did this to stimulate our young people," the mayor stresses.
The challenge of the archaeological excavations started even before, in 2007, when the Etruscan necropolis of Balena was excavated. The search for the ancient baths began in 2016, and in 2019 came the excavation, which the town council generously financed.
Ever since there has been a succession of surprises, up to the most amazing of them all, in these very days, with the discovery of 24 bronze Roman statues.
It is a huge satisfaction, even though there is something that perhaps counts even more for San Casciano and that is the valorization agreement that has been signed with the Ministry of Culture and the University for Foreigners of Siena, to give birth here to a museum, archaeological park and international university research school. It is in fact a wager on the future of this small community which is already dreaming of seeing the streets of its borgo teeming with young people, as it was last summer with the students from the University for Foreigners of Siena sent in to give the archaeologists a hand.
Agnese looks around her, while below her, on the bottom of the Roman pool, the dewatering pump has started up again to enable the archaeologists to excavate and free the last finds from the mud.
The long summer is really over, it's windy and it's starting to get cold. Encased in her leather jacket, the mayor looks far off, sighs, and smiles again. Then she rediscovers her fighting talk: "This accord is for us a hope of succeeding in keeping our young people here, to persuade those who have given up to think again".
In short, the biggest challenge is just beginning. (ANSA).