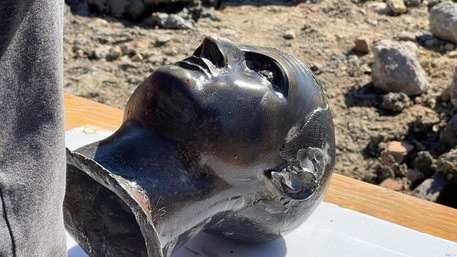 (ANSA) - SAN CASCIANO DEI BAGNI, NOV 8 - Imagine a temple that is also a hospital and in part a spa too.
A fairy-tale place immersed in nature where people can meet to pray or to ask priests for oracles about the future.
But also a place where you can bathe in hot, therapeutic pools of all sizes to find comfort from the weakness of one's body under the benevolent eyes of the gods.
The Shrine of the Great Bath (Il Santuario del Bagno Grande) at San Casciano, Tuscany, was all of this.
It was founded and used by the Etruscans, who were at home here, and then passed on to the Romans with an osmosis of science, religion and culture that seems to have had few equals in the ancient world.
"It was a space for healing and for prayer," said Jacopo Tabolli, the archaeologist from University for Foreigners of Siena who has been leading the excavation mission seeking to uncover the secrets of the ancient shrine since 2019.
In short, it was a wonderful place where, amid the 1,000 shades of green of the area's hills, people came to improve their health and pray, caressed by the waters that, today like 2,300 years ago, emerge from the earth at a temperature of between 38 and 42 degrees.
Its story is told, first and foremost, by the ex-votos: dozens and dozens of legs, arms and ears, as well as livers, wombs and penises - all reproduced in bronze, a characteristic that makes this shrine a unique example in the ancient world.
In many cases these were covered in inscriptions, both in Etruscan and in Latin, dedicated to the gods and sometimes with information about the very special characteristics attributed to these waters.
Among the offerings made to the gods and so carefully placed in the biggest and deepest bath - the one reserved for sacred purposes where people may have prayed, but without ever getting into the water - there are some that suggest this was much more than a thermal complex.
There are various types of items of medical equipment, surgical scalpels, a specillum.
There are also two remarkable bronze "poliviscerali", effectively stylized representations of the human organs, although here they appear "as accurate as with a CT scan" Tabolli observed.
Again these are cases of ex-voto offerings to the gods.
"They stem from the Roman era but they hail back to the memory of the Etruscan age, which in some ways is an acknowledgment of their great medical knowledge," he said.
So the Great Bath Shrine was a place where medicine was practised, with priests probably doubling up as doctors.
And, following the Etruscan tradition, medicine was accompanied by divination, with auspices based on the interpretation of lightning and thunder and signs of nature, as well as the "reading" of organs, especially the liver.
"Divination practices were linked to the therapeutic, medical universe, the favoured places for which were shrines," explained Tabolli, showing a beautiful bronze lightning bolt, which was among the gifts to the gods from the Great Bath.
"The water here also had the power of an oracle".
So one of the hypotheses is that this shrine, which was so important that it was frequented by the highest social classes and even by emperors, hosted other structures next to the spectacular scene of the pools spread out over several levels with a grand portico, fountains and altars - sheltered places where one could stay overnight and perhaps have medical examinations and surgery and rooms for convalescence.
Future excavations may help clarify these points, Tabolli said with enthusiasm.
In the meantime the experts called in by the team of archaeologists to study the geochemistry of these waters are at work.
And who knows? Perhaps, after over 2,000 years, the medical knowledge of the Etruscans might still be useful. (ANSA).