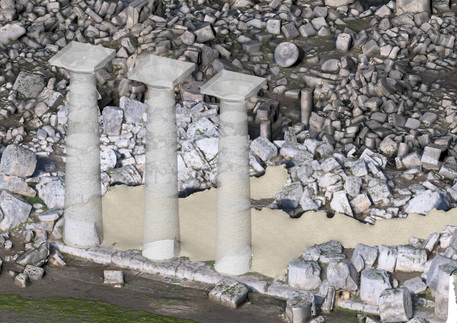 (ANSAmed) - SELINUNTE, SEPT 30 - Three of the 16-meter-high columns of the G temple, the pride and joy of ancient Selinus, will be rebuild at the Selinunte Archaeological Park, ANSA has learned.
Some 2,600 years ago the holy building, which was as big as a soccer field, represented the monumental proof, in stone, of the power and wealth of the glorious Greek colony founded by the men of Megara Hyblea.
The project to rebuild the columns of temple G using the original stones at the site was strongly advocated by the late archaeologist Sebastiano Tusa.
University of Urbino archeologist Oscar Mei told ANSA that the reconstruction will be the final part of a complex research-and-restoration plan, featuring the creation of a museum, funded with five million euros from the outgoing Sicilian regional government, thanks to the passionate efforts of Culture Councillor Alberto Samonà.
The project will go on for at least a year and a team of leading experts is already at work: along with Mei, who has been working on the excavation campaign at the Sicilian park since 2010, are archaeologist Valerio Massimo Manfredi, who was the first to suggest a reconstruction project many years ago, and Claudio Parisi Presicce, who has vast experience in the study of Greek archaic temples.
This project worksite "will be open to the public at all times", said the director of the archaeological park, Felice Crescente. The contribution of other universities will also be required, given that the building - which is 109 meters long and 50 meters wide and is believed, according to the most recent hypotheses, to have been dedicated to Zeus - is considered the largest "peripteral" temple, a temple surrounded by a portico with columns, of the ancient Mediterranean. It is an ancient wonder which, after suffering the Carthaginian conquest, earthquakes and centuries of wear and tear, today looks like an immense heap of rubble. The reconstruction of a few columns would give the site a very strong visual impact.
"We are not seeking spectacularity," warned Mei. "This is not about rebuilding the temple, but a major scientific research-and-preservation operation". At the moment it has nothing to do with the reconstruction project backed in 2018 by top Italian art expert Vittorio Sgarbi, who at the time was serving as an executive councilor in Sicily and suggested sponsors contribute 15 million euros to reconstruct the entire temple.
Mei noted, however, that in recent years the need for a maintenance intervention had become clear because "the architectural elements, made to be upright, are crumbing away".
So erecting some columns on the southern side, chosen from those in best condition and with capitals, is primarily justified for conservation purposes, the professor said.
Naturally, however, "it would be a way to make the monument easier to understand for visitors," he added.
The project starts with a study phase, researching the archives, bibliography and iconography of the temple. At the same time, photogrammetry surveys will be carried out along with those done with a 3d laser scanner to map out the materials the columns were built with.
Then geophysical work will be done around the temple to see whether there were other buildings, first of all the altar, and then surveys on the ground beside its perimeter will be done.
The area will also be cleaned of vegetation.
Councilor Samonà, who is leaving his role, said he is proud. "It will be a large construction site of knowledge", he said, explaining that it will be set up to allow visitors to follow the work closely, with a multimedia corner featuring a virtual reconstruction of the temple.
Mei revealed that many steps forward have been made in recent years to clear up the mysteries of these ruins.
It has been discovered, for example, that what looked like an unfinished temple was actually a "not well refined" building.
"The column grooves, which are usually done last, were missing, the decorative elements had not been finished and the steps of the base had not been chiselled," he explained.
So today archaeologists are certain that the great temple was fully in use when the Carthaginians took control of the city in 409 BC.
"It's probable that economic problems arose when it came to doing the decorations," he said.
"For some time it had been clear that the construction of the enormous temple has been ongoing for decades".
Having arrived via sea, Hannibal's soldiers ravaged the rich colony.
But they did not reduce the temple to rubble.
Earthquakes, probably in the Middle Ages, did that.
Then there was the effects of the passage of time - some of the columns were still upright in the 18th century.
A powerful temple stands not far away.
It was rebuilt in the 1950s with generous use of reinforced concrete.
Smiling, Mei said that no one considers that reconstruction an example to follow nowadays.
"That was how things were done then," he said. "One learns from mistakes".
(ANSAmed).