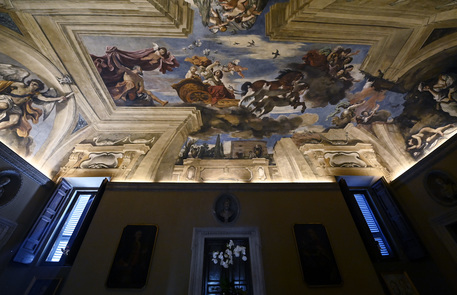 (ANSA) - ROME, JAN 19 - Casino dell'Aurora, a Rome villa that hosts the world's only surviving Caravaggio fresco, went up for auction on Tuesday but drew no bidders.
The auction house said it would set another date for the auction of what has been billed as "the world's most expensive home" within 45 days.
The procedure to sell the Renaissance villa, whose artistic jewels include Caravaggio's Jupiter, Neptune and Pluto mural, lasted until Tuesday evening, when the auction was declared "deserted".
The starting price was 471 million euros and the reserve was set at 353.25 million.
The villa is being auctioned off after the heirs of an Italian nobleman, Prince Nicolò Boncompagni Ludovisi, failed to reach an agreement for the future of the residence following his death in 2018.
His widow, 72-year-old Texas-born former actress, television journalist, and real estate executive Princess Rita Boncompagni Ludovisi, told Reuters that Bill Gates and a Qatari emir were among those to have expressed an interest in the 2,800-square-metre property.
The princess, who once posed for Playboy, had failed to agree with the prince's children on who should get ownership of the villa.
The lavish building also features five rooms with frescoes by Guercino, sculptures, statues and a splendid garden, although much of the structure needs a makeover.
A petition has been launched via Change.org calling on Culture Minister Dario Franceschini to intervene and take out its option to buy the home and its artworks. (ANSA).