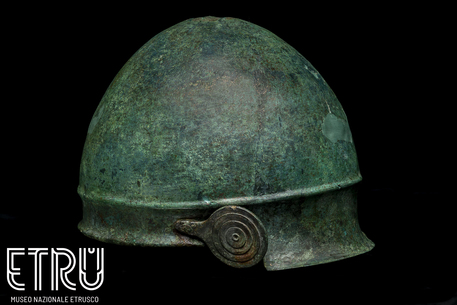 (ANSA) - ROME, DEC 28 - A fourth-century BC Etruscan helmet has yielded a hidden inscription about its provenance after a recent cleaning.
The helmet, forged in bronze in Perugia in the middle of the fourth century BC for a mercenary and later found in the tomb of an Etruscan warrior, has now been found to carry the inscription ""harn ste" inside, a likely reference to the ancient city of Aharnam, today's Civitella d'Arna, cited by Roman historian Livy as the encampment of a praetor before the Battle of Sentinus during he Third Samnite War in 295 BC.
"It's a story that has remained hiden in plain sight," the had of the Natioanl Etruscan Museum at Villa Giulia in Rome, Valentino Nizzo, told ANSA, explaining that when the helmet came out of the ground in Vulci in the 1920s "it was probably covered with dirt and oxidation that concealed the letters". (ANSA).