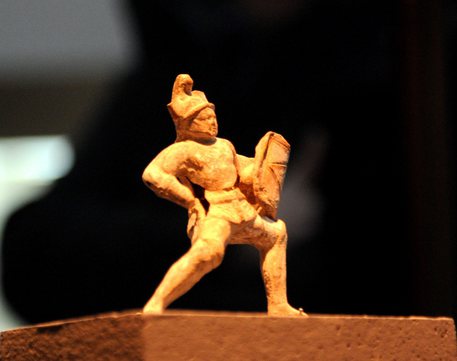 (ANSAmed) - ROME, NOV 22 - Over 30 artworks, including sculptures of divinities represented in toys from thousands of years ago, will outline the theme of the daily life of children in the Roman empire. The display has been organized by the Uffizi Gallery as part of the archaeological show 'A misura di bimbo. Crescere nell'antica Roma' (measuring for children.
Growing up in ancient Rome). The exhibit is scheduled from November 23 to April 24, 2022. The exhibition space, the museum said in a statement, describes different moments in the everyday lives of children in the Roman empire represented by statues, sarcophagi and daily objects like toys: birth, rites of passage towards adult age, school, play, the relation with animals, fears.
Among the works on display are a statue of Mercury with a small Bacchus, restored and given back to the public after sitting in a deposit of the Uffizi Gallery for decades, a rare doll in ivory from the third century AD which had never been exhibited, a toy statue of a gladiator with combinable accessories and funeral statues from the Hellenistic and Roman periods, never presented to the public. The exhibit, while conceived for an adult public, also offers an interpretation for children. Frames and cartoons of some of the artworks on display at a lower height allow children to look in the eye their peers from 2,000 years ago.
"The show is inaugurated close to World Children's Day, on November 20, which should not remain an empty celebration", commented Uffizi director Eike Schmidt. "For the Uffizi, it is an occasion to approach an age group that is little considered artistically, both as an object and public. Art isn't just for adults and this show is proof, involving peers by crossing centuries of history".(ANSAmed).