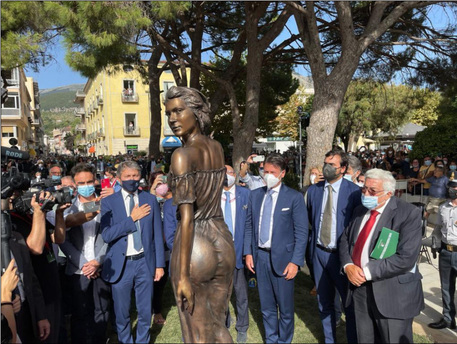 (ANSA) - ROME, SEP 28 - An allegedly sexist statue of a woman in a 19th century poem about a Risorgimento tragedy has been unveiled at the site of patriot Carlo Pisacane's failed 1857 landing at Sapri in Campania.
The bronze statue by sculptor Emanuele Stifano, called La Spigolatrice di Sapri (The Gleaner of Sapri) like the commemorative poem, has been accused of being anachronistically scantily clad.
Its detractors say it does not accurately depict 19th century working women and is blatantly sexist.
Stifano was unrepentant saying "if it was up to me I would have done it completely nude".
Former House Speaker and feminist Laura Boldrini said the statue "is an insult to women and the history it is supposed to be celebrating".
Other women MPs criticised the fact that it was unveiled by an all-male group of local and national officials including former premier Giuseppe Conte.
Actor Alessandro Gassmann quipped that a similar statue should be put up to Risorgimento hero Giuseppe Garibaldi. (ANSA).