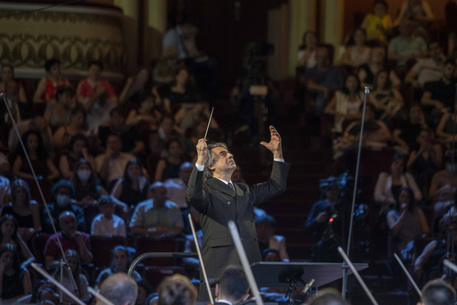 (By Elisabetta Stefanelli) (ANSA) - ROME, JUL 5 - Riccardo Muti led the Luigi Cherubini Youth Orchestra, along with musicians from the Armenian Philharmonic Orchestra and the Armenian State Chamber Choir, on July 4 , in a concert that renewed ties dating back to the Roman and Byzantine times, when Ravenna hosted a flourishing Armenian community.
The concert was staged as part of the Ravenna Festival's The Roads of Friendship project, which, since 1997, has featured visits to cities that have played an important role in ancient and contemporary history.
The concert that refastened the bond between the two cultures - 20 years after the Ravenna Festival's first journey to Armenia - was greeted with 15 minutes of applause at the Yerevan Opera Theatre Armenian President Armen Sarkissian wanted to seal that bond by awarding the maestro and Cristina Mazzavillani Muti an important honour named, as coincidence would have it, after Friendship.
But, as always, it was the music that primarily did the talking with a programme that, starting from the sacred music of Haydn, Mozart, and Schubert, reflected the pained spirituality of this country, the first to embrace Christianity over 1700 years ago.
It concluded majestically with the world premiere of Purgatorio, a work commissioned by the Ravenna Festival from Tigran Mansurian, the greatest living Armenian composer, for the 700th anniversary of Dante's death.
The voices belonged to tenor Giovanni Sala, and Armenians Nina Minasyan and Gurgen Baveyan, soprano and baritone respectively; the choir was led by Robert Mlkeyan, while Davide Cavalli was on the organ.
In addition to the festival's traditional public and private supporters, the concert was made possible by the support of the Italian Ministry for Foreign Affairs and International Cooperation and the collaboration with the Italian Embassy in Yerevan and the Centre for the Studies on Armenian Culture of Venice.
"We still remember the emotional silence, the intense feeling in the Arts and Sports Palace in Yerevan in the summer of 2001, when we performed an all-Verdi programme," recalled Riccardo Muti.
"Today, 20 years after that concert, we are back in the hard, ancient land between the West and the East.
"We build another bridge of brotherhood, a sign of hope, as we still believe that music overcomes misunderstandings and differences of culture, language, and religion.
"Music makes it easy to understand each other because music is everyone's language, it's universal like Dante's poetry, which we wish to celebrate together with the Armenian people, who know it and love it.
"Because we can find ourselves and find others in beauty, in poetry, in the arts; find again the warmth of an embrace and peace." It was on the summit of Mount Ararat, which tradition says was the resting place of Noah's Ark, that life resumed after the flood; within sight of the ancient mountain, which the Armenians consider holy, the Ravenna Festival renewed the message of brotherhood and hope in the future of The Roads of Friendship, a project started in 1997 when the Festival answered the call from Sarajevo.
Muti has led Italian choirs and orchestras in a series of shows since that iconic concert in the 'martyred' Bosnian city, joined on each occasion by local musicians.
Among the unforgettable events were concerts in Beirut, Jerusalem, Moscow, New York after 9/11, Nairobi, Redipuglia, Tehran, Kiev, and, in 2020, at the Paestum archaeological site, which is twinned with Palmyra in Syria, to recall the plight of the Syrian people.
The 700th anniversary of Dante's death offered the occasion to return to Yerevan with the new composition by Tigran Mansurian, inspired by the second part of the Divine Comedy.
It is one of three works inspired by Dante's masterpiece.
The first, Giovanni Sollima's Six études on the Inferno premiered on June 10, while Valentin Silvestrov's O Luce Eterna will be presented in the Basilica of Sant'Apollinare in Classe on July 9.
"I have always kept an Armenian translation of the Divine Comedy on my desk," said Tigran Mansurian, whose highly delicate, crystalline style is often inspired by sacred music as well as by traditional and folk music.
"So I was happy to be asked to create a new composition on the Commedia but I also felt great responsibility with respect to Dante and Maestro Muti.
"I started this work three times and finally I completed the fourth draft.
"I also had to reduce the number of performers due to complications linked to the pandemic and I was glad for the chance to rewrite the work for the baritone, chamber choir, string and percussion orchestra.
"I consider this version to be the final one and the one that best matches my musical world in relation to the Dante universe.
"I am convinced that this concert, together with the Roads of Friendship show of 20 years ago, will go down as one of the most meaningful and memorable events of the cultural life of Armenia of the last few decades." (ANSA).