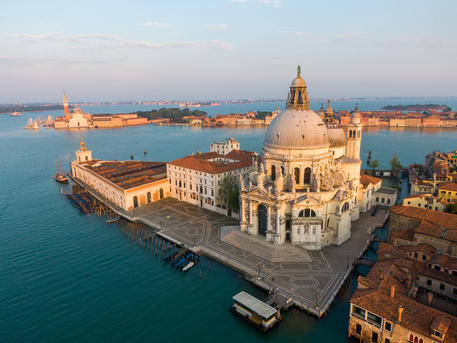 (ANSAmed) - VENICE, MARCH 22 - Venice will be celebrating the 1,600th anniversary of its founding starting on March 25 and events in honor of it will run through all of next year.
The events will tell of the history, attractions, and culture of the city that made it a world icon over the course of its 16 centuries in existence.
The town council hopes these events will lead to a renaissance of sorts, a sign of resilience to the pandemic that has emptied it of tourists.
The first official event will be on Thursday, March 25: the date that marks 1,600 years since legend has it that the first cornerstone of the San Giacomo di Rialto (San Giacometto) Church was laid.
Historians do not agree on the exact date, since the period featured constant migration flows. Veneto region inhabitants fleeing attacks by barbarian hordes at some point, however, joined the settlements of the first inhabitants of the islands in the lagoon.
The foundation of Venice is generally considered borne witness to by a manuscript by Chronicon Altinate and, in a more recent era, by Marin Sanudo, who described the massive fire of the Rialto bridge in 1514, stating that: "Solum restò in piedi la chiexia di San Giacomo di Rialto, la qual fu la prima chiexia edificata in Venetia dil 421 a dì 25 Marzo, come in le nostre croniche si leze".
The celebrations will begin on March 25 at 11 AM, during the Annunciation, at St Mark's Basilica, where Patriarch Francesco Moraglia will be holding a mass broadcast live - to avoid gatherings in these COVID times - on the Antenna 3 network as well as the Facebook profile Gente Veneta.
At 4 PM, all the churches of the patriarchate will ring their bells at length.
At 6:30 PM, state broadcaster RAI will be paying homage to Venice with music, photos, and the story of the city's 16 centuries as well as a look at what the future may hold for it.
There will be events marking the anniversary throughout 2022, with 235 initiatives lined up presented by 135 bodies after an international call for proposals launched by a committee set up for this purpose by the town council.
There will also be the Venice Boat Fair in the city from May 29 to June 6 and the Architecture Biennale from May 22.
(ANSAmed).