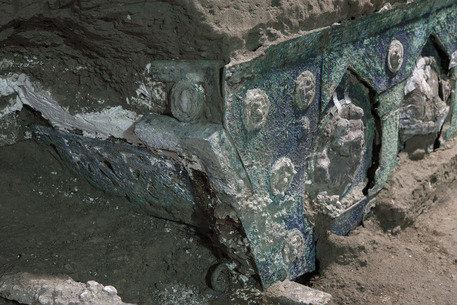 (ANSA) - ROME, FEB 27 - (by Silvia Lambertucci).
Elegant and light, stunning in the complexity and delicacy of its tin and bronze decorations, incredible in its completeness, with traces of its cushions, ropes to hold its garlands of flowers, and even the imprint of two ears of wheat left on a seat. In Pompeii, excavations at the villa di Civita Giuliana show no sign of exhausting their amazing finds, recently yielding an extraordinary parade carriage, painted in red and covered in decorations of an erotic nature, destined perhaps for the cult of Ceres and Venus or more likely for an aristocratic wedding ceremony.
"It is unique for Italy," ANSA hears from Massimo Osanna, outgoing director of the Archaeological Park and the scientific head of the excavations, "a discovery of very great importance in advancing our knowledge of the ancient world".
It may be, the archaeologist explains, a 'Pilentum', namely something that ancient sources describe as a ceremonial carriage, a vehicle only used by the elites and only in ceremonial contexts.
"We had never seen one like this in Italy before. It can only be compared with a series of carriages found 15 years ago in a tomb in Thrace, in northern Greece, on the border with Bulgaria," Osanna says.
One of these Thracian carriages, in particular, he explains, "resembles ours very much, but is not decorated." These 'Pilenta' (plural), cited by Claudianus and others, could in fact be painted blue or red, as is the case with the Pomeiian find. Reserved for the well-off classes, they were used for religious cults, but were a little like an automobile reserved for prestigious events.
The discovery made a few days ago therefore reopens the mystery of the owners of this great villa built just outside the ancient city, and which is today being brought back to light, also in a bid to stop the depredations of the tomb raiders, who in past years dug tunnel after tunnel around these rooms, plundering and destroying. And who are today on trial, albeit on parole (the home of one of the accused is in fact on the land where the dig is proceeding) thanks to the investigations, still ongoing, by prosecutors in the nearby town of Torre Annunziata, led by Nunzio Fragliasso.
"A very large and particularly precious villa for historical investigation, because unlike many others that were emptied by restructuring following the earthquake in 62 AD, it was still inhabited in the days of the eruption in 79 AD," recalls Osanna.
It is in fact, it should be recalled, the same dwelling in which, a few months ago, digs found the remains of two men, perhaps a master with his slave, whom the park's archaeologists reconstructed using the cast technique. And it was right here that, in a stable a few steps from the portico that stored the carriage, the remains of three horses came to light in 2018, one of them sumptuously decked out, ready, it appeared, to set out on the road. Without forgetting the fresco with a graffito of the little Mummia, perhaps a young house girl, which emerged on another wall, a short distance away too.
The discovery of the carriage thus appears to be a fresh, precious piece in the complicated jigsaw of this story. So much so, in fact, that it may well not have been the only one, since in the ongoing trial a witness mentioned the presence of another carriage, also richly decorated, which sadly ended up in the hands of the plunderers and then disappeared. But the question remains: what was the purpose of this decorated 'pilentum', as bright as a jewel? Who really were the wealthy owners of this estate which, with its fabulous terraces, stretched down to the sea? "We found the imprints of ears of wheat on the hardened ash taken from one of the two seats," said Osanna.
A detail, he explains, that could lead one to think of the cult of Ceres, who was honoured at Pompeii together with Venus, and therefore "the presence in the villa of a priestess of these cults". But that's not all. Because more simply, he says, it could be a fertility augury: "the sheaves on the seat could be evidence of a marriage celebrated shortly before, or which was ready to be celebrated".
The mystery of who the owners were remains, in other words. But in support of the second hypothesis, that of an imminent or just celebrated wedding, we have the decidedly erotic nature of the refined tin decorations applied on a bronze mounting to adorn the rear and sides of the carriage: a series of cupids and pairs of satyrs and nymphs engaging in passionate embraces. It will be the restoration, already under way in the park's workshop, and academic studies, of course, that will shed more light.
But in the meantime, Osanna concludes, "since the ancient sources allude to the use of the 'pilentum' by priestesses and aristocratic ladies, it cannot be ruled out that it may be a carriage used to take the newlywed to her new domestic hearth".
(ANSA).