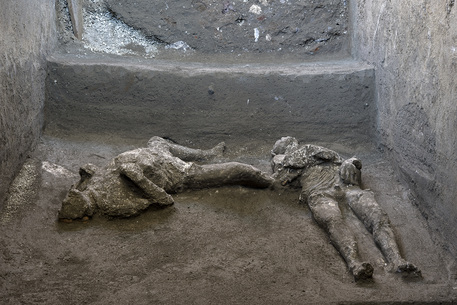 (ANSA) - NAPLES, 21 NOV - (by Silvia Lambertucci) To see them like this, the blood seeming to still pulse in the veins of those hands resting on their chests, their curled fingers, the cotton of the tunic rumpled up on the belly, it almost seems as if no time at all has passed. They are the almost complete and unblemished bodies of two men, a 40-year-old wearing a warm woolen cloak and his young slave already bent by life's labours; these are the thrilling new revelations of Pompeii, the fruit of an excavation that went ahead even in these hardest weeks of the pandemic and which ANSA has been able to exclusively document. "A truly exceptional find," enthuses director Massimo Osanna, since September 2020 head of the general management of public museums," because "for the first time in over 150 years, ever since the first use of the technique, it has been possible not only to make perfectly matching casts of the victims, but also to investigate and document with new technologies the things they had with them at the moment they were engulfed and killed by the eruption's boiling vapours." It is a riddle that is still partially unsolved, the archaeologist explains, because it will probably take the next few months of digs to tell us where the two men were headed and, who knows, also perhaps to better clarify what their roles were in the grand and beautifully appointed residence where they were found. The site of the new discovery is the suburban villa at Civita Giuliana, the plush estate of the Augustan era with grand rooms and terraces giving splendid sea views in whose stables, in 2017, the Park's archaeologists found the remains of three thoroughbred horses, one even kitted out with a refined saddle made of wood and bronze and shining tacks, as if it had been got ready for the imminent departure of its master, in all probability, Osanna says, "a military commander or a high-ranking magistrate", perhaps a member of the Mummii, a storied Roman family of the imperial epoch, given that the same villa yielded the remains of a frescoed wall with the graffitoed name of a young girl, the little "Mummia". Whatever the truth of that, refined and lordly rather like the celebrated Villa of the Mysteries or like the Villa of Diomedes which inspired so much literature of the past centuries from Théophile Gautier to Sigmund Freud, the Villa of the Harnessed Sorrel was able to boast a breathtaking position, immediately outside the city walls, with lush terraces and sloping gardens from which the residents and guests could enjoy the enchanting view of the Bay of Naples and Capri. Arranged in dozens of different living areas as was the custom in the richest dwellings, it was endowed, alongside the ceremonial areas and the noble bedrooms, "also with an efficient service quarters, with the kitchen garden, the oil and wine warehouses and ample plots of densely cultivated land" The first digs here date back to 1907-1908, by Marquis Giovanni Imperiali, then owner of the land.
But after digging, the marquis had his men re-inter those areas without leaving an adequate documentation. The current digs, entirely funded by the Pompeii Park to the tune of one million euros, are the product of a joint operation with the prosecutor's office in Torre Annunziata, prosecutor Pierpaolo Filippelli, and the Carabinieri, to stop the local tomb raiders, who have left ample traces of their painstaking activities here.
After the investigation of the stables, since January 2020 there have been excavations under the very long cryptoporticus, built under one of the large terraces. ."We were lucky," says Osanna, "because the area where we found the bodies of the two men had eluded both the excavations at the start of the 20th century and the tomb raiders: a trench dug by the tomb raiders passed virtually beside the feet of one of the two victims". An almost intact area, and for that reason particularly precious. The last few weeks have seen archaeologists working at a fever pitch. "We detected the presence of pockets in the layer of pyroclastic material and then got the surprise of human remains," says an enthusiastic Osanna.
Conditions were optimal to try to get casts of the victims, following the technique perfected in 1863 by Giuseppe Fiorelli.
The last attempt was made in the 1990s, sadly without any great success. But this time the experiment succeeded perfectly. "It also worked for what the pair were carrying, which proved to be a piece of woolen fabric, perhaps another cloak, perhaps a blanket".
And preliminary studies seem to have already identified the moment of the end, on the second day of the eruption, the morning of October 25 (according to a recent new proposed dating), of that fateful 79 AD. There remains the riddle of the men's identity. The director shakes his head and shrugs, citing the precedent of the Villa of Diomedes, where the fist digs, at the end of the 18th century, restored precisely in the cryptoporticus the remains of many people, men, women and children, who had probably felt shielded from the cataclysm in those underground chambers. Who knows, perhaps the man with the cloak and the slave who was with him were trying to reach the rest of the family after having guarded the property from the outside up to the last moment. The mystery is still open for now. Osanna, who in a few months will pass the baton to the next director, urges patience: "Now it is fundamental to continue the excavations," he concludes. "It will take time, but in the end the Villa of the Harnessed Sorrel, just like the Villa di Diomedes where work will conclude in the spring, will be able to open to the public with all its fascinating stories". And at a time of a pandemic, he smiles, "the continuation of the restorations, excavations and studies is also a light illuminating the future". (ANSA).