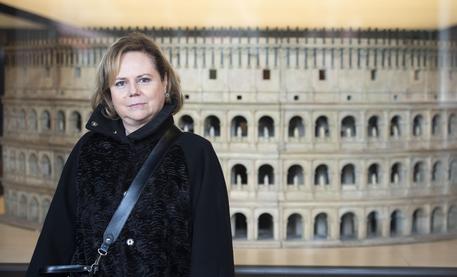 (ANSA) - Rome, February 17 - A hypogeum or underground temple and tomb structure with a tufa sarcophagus linked with what looks like an altar has been discovered in the Roman Forum, the Colosseum Archaeological Park director Alfonsina Russo said Monday.
The space is believed to be part of a votive area called a heroon devoted to the founder of Rome, Romulus, she said.
The sarcophagus, made out of the same tufa rock that built the Capitol, is around 1.40 metres long and is believed to date back to the sixth century BC, she said.
The find was made next to the Curia-Comitium complex, a few metres away from the famed Lapis Niger, which Romans thought had brought bad luck because it was linked to the death of Romulus, Russo said.
She said she would present the discovery to the media on Friday.
"This is an extraordinary discovery," Russo told reporters on Monday.
"The forum never ceases to yield amazing fresh treasures," she said.
The discovery was made during a dig that "started about a year ago to celebrate and commemorate the discoveries made by famed archaeologist Giacomo Boni at the beginning of the 20th century," Russo said.
The hypogeum is located below the entrance stairway to the Curia, where Senators met to vote.
The new entrance stairs were built in the 1930s by Alfonso Vartoli.
Russo said that scholars believe the altar to have been placed on the spot where ancient Romans believed Romulus was buried.
This is according to a reading of the ancient Roman historian Varo, cited in the poet Horace's Epodes, the Colosseum Park director told reporters.
"It it not an accident," experts cited by Russo said, "that this underground altar was placed close to the Lapis Niger".
The excavation and valorisation of this monument to the cult of Romulus and the origins of Rome will be illustrated by Russo and the team of archaeologists and architects who have been involved in the discovery, on Friday 21 February at 11 o'clock in the morning. A hypogeum or hypogaeum, literally meaning "underground", from Greek hypo (under) and gaia (mother earth or goddess of earth) is an underground temple or tomb.
Hypogea will often contain niches for cremated human remains or loculi for buried remains. Occasionally tombs of this type are referred to as built tombs.
Hypogeum can also refer to any antique building or part of building built below ground such as the series of tunnels under the Colosseum which held slaves (particularly enemy captives) and animals while keeping them ready to fight in the gladiatorial games. The animals and slaves could be let up through trapdoors under the sand-covered arena at any time during a fight.