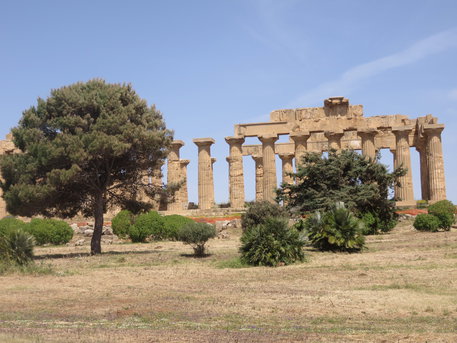 (ANSA) - Palermo, July 4 - Professor Clemente Marconi of New York University on Thursday presented the results and discoveries of the 13th international archaeological dig in the Selinunte Acropolis, conducted by NYU and the University of Milan in collaboration with the archaeological park in western Sicily.
Particularly important were the findings of a votive deposit of perfectly preserved red deer antlers (Cervus Elaphus) and two large adult bull horns (Bos Taurus).
The remains are the first archaeological evidence of bull sacrifice in Selinunte.
Marconi led the dig, in which over 50 students and experts from eight countries participated.
The seminar and a guided tour of the dig site were organised as part of the "Worksites of Knowledge" project sponsored by the new director of the Selinunte archaeological park, architect Bernardo Agrò.
Agrò previously organised and directed similar seminars and tours at Medieval and modern monuments in other areas of Sicily.
This year's Selinunte dig focused on deepening two trenches that were opened last year along the southern side of Temple R and between the western side of Temple R and the southern side of Temple C.
The dig produced important results regarding the most ancient phases in which the large urban sanctuary was inhabited, and regarding activities associated with the construction of Temple R and Temple C.